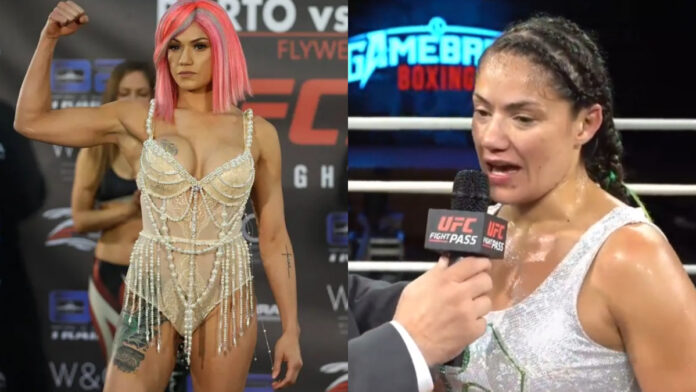 Pearl Gonzalez made a successful switch over to pro boxing.

Former UFC star Gonzalez had a brief stint of two outings in 2017 under the banner, dropping them both to Cynthia Calvillo and Poliana Botelho. Gonzalez made her way to Invicta FC to continue her mixed martial arts career. She went on to rack up four wins and two defeats in her final six outings in 2020.

Gonzalez took on Danielle Wynn, another pro boxing debutant, in a bantamweight matchup. They participated under Jorge Masvidal’s Gamebred Boxing 2 at Biloxi Civic Center in Biloxi, Mississippi, and was streamed on UFC Fight Pass.

“The Chi-Town Princess” put her boxing chops to the test in an impressive showing. She came out on top of the judges’ scorecards to get the nod by decision.

Following her win, she announced her triumphant return to combat sports and gave a shoutout to her supporters, including Amanda Serrano.

“I’m back b*tches!” she said (ht MiddleEasy). “For real. It was amazing. I’ve been working hard on my boxing for the last year and a half. Big shout to my team… big shoutout to Amanda Serrano.”

Pearl Gonzalez called it a day on her MMA career when she made the move to bare-knuckle boxing. She joined BKFC in Feb. 2020 and racked up an even 1-1 record in the sport, defeating Charisa Sigala and conceding to Britain Hart in November. As for her days of competing inside the cage, she holds notable wins over Kali Robbins, Barbara Acioly and Daiane Firmino. It remains to be seen if and when she books her next boxing match.

Are you excited to see Pearl Gonzalez make her return?