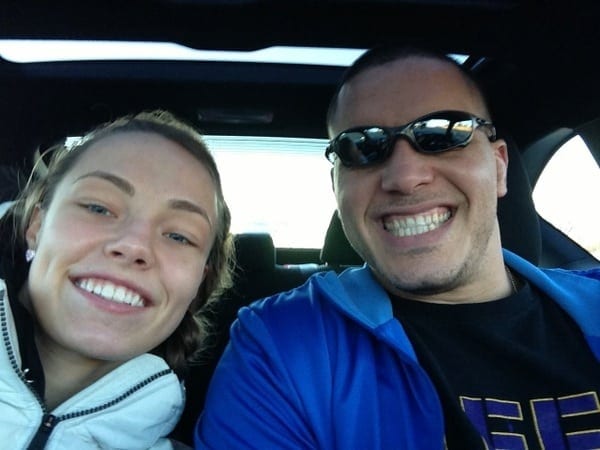 But that victory showed just how fickle the fight game can be, as Namajunas returned from nine months out of fighting to defeat “The Karate Hottie” after dropping a disappointing hard-fought decision to No. 2 strawweight Karolina Kowalkiewicz at UFC 201, derailing her title shot aspirations for the time being.

Namajunas didn’t get stopped or even demolished in that fight, so to say, but one of the things – probably the most major thing – missing from her camp was her longtime boyfriend and cornerman Pat Barry, the UFC and kickboxing veteran who had quietly been out of combat sports since early 2015. While “HD’s” absence from “Thug” Rose’s corner elicited a significant amount of speculation as drama like that tends to do on social media, Barry appeared on this week’s edition of The MMA Hour to detail the reasons why he was gone in an emotional interview.

The touted knockout artist detailed a scene where he had been jailed for driving under the influence following a scene where he had nearly become involved in a fistfight with a patron at a local pizza joint while in Alexandria, Minn., helping Brock Lesnar prepare for his then-upcoming UFC return against Mark Hunt. Barry described that he had called Namajunas to say good night, but then never answered her texts or calls because he was incarcerated. That was when he knew he couldn’t get out, and now the woman who had supported him for so long had begun to give up on him, too:

“That was the moment, I realized, I can’t get out of this cell if they don’t let me out, I can’t get out. Me, ‘Gorilla Pat,’ I can’t physically break out. I can’t talk my way out. The one person I called hung the phone up, and didn’t answer, Rose. [She was] disappointed. I figured out this doesn’t need to go any further. I realized, s–t needs to change and s–t needs to change now.”

Barry then detailed his addictive tendencies to Ariel Helwani, noting that he became hooked on prescription pain meds, an epidemic all too common today:

“Pills and stuff, it’s not for me because I want all of them,” he said. “They don’t have enough for me. It’s like, ‘If one makes you feel like this, what does 17 make you feel like?’”

Namajunas believed it was time for her to move on from Barry, at least how he was in his current state, so she left him, and that was when he said he realized things had to change. He blamed himself, putting any of Namajunas’ failures as a fighter on his poor decision making:

“Go back to any of Rose’s performances that didn’t seem quite right. It was me,” he said. “I was the outside distraction. This guy. Any performance. I’m not talking about just fighting. Any interview that seemed off and weird, any post on social media, it was my f—king fault. So I said, I’m not doing that no more. She should’ve been world champ two years ago. It was me. I didn’t know it was me, but it was me.”

The failures of a top-ranked UFC competitor headed for a title shot are certainly a huge – and most likely, unnecessary burden -for one man to shoulder, and it could also be said that the 25-year-old Namajunas just isn’t as good as Jedrzejczyk is right now, and may not ever be.

But for their relationship, which Barry and Namajunas showed incredible courage in revealing the intimate details of to an audience of MMA faithful that can be notoriously harsh, he quit using prescription pills and alcohol ‘cold turkey’ to mend their bond. Barry is now headed for his first fight in almost three years when he meets former Bellator title contender Eric Pringle in a kickboxing match using MMA gloves on November 18. He’s got Namajunas and his drive to compete back, and in doing so, his life.

After proving he could stay sober for a year now, Namajunas voiced her own love and support for her longtime partner during the interview:

“I just love this guy. We’ve been bouncing around a lot, I never had a place to call home. I have a home now, not just an actual house, but my coaches and this guy. If I can’t do it with them, I don’t want to do it. It’s more about the journey and the experiences with each other, and that makes it the best rollercoaster ever.”

Finally, Barry offered a positive path moving forward due to his diligent commitment to rising above addiction: