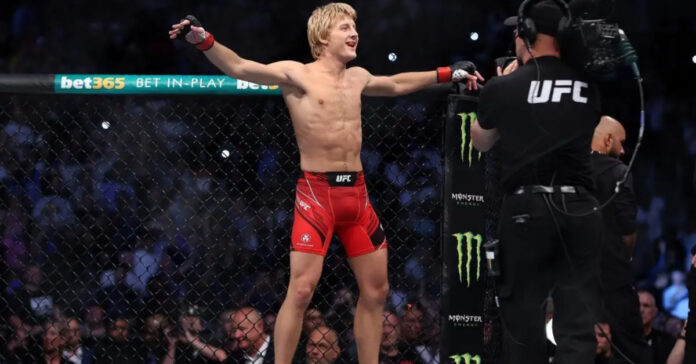 Paddy Pimblett has revealed his interest in squeezing in one more fight before the end of the year, targeting UFC 282 in December.

Whilst making an appearance in the commentary booth at the recent Cage Warriors 144 event, Paddy Pimblett has stated his interest in taking part in the UFC’s final pay-per-view event of the year.

“UFC 282, I’m planning on fighting on that — Dec. 10,” Pimblett said. “So I’m just waiting for an opponent, lad. I’m waiting for someone to step up and sign on the dotted line. Everyone talks about ‘The Baddy,’ everyone talks about fighting me. But then the contract’s in front of them, you know, they’re not as confident.” (Transcribed by MMAFighting)

Pimblett has taken to the UFC by storm earning victories in all three of his bouts whilst competing inside the promotion. The 27-year-old overcame adversity in his first matchup against Luigi Vendramini before unleashing a fury of strikes that would see him score a first-round finish in his debut matchup.

He would then follow up these performances with two more stoppage victories. First by submitting Rodrigo Vargas when the UFC initially returned to the United Kingdom back in March and then securing himself his third victory when the promotion later returned to London in July by submitting Jordan Leavitt in the second round.

As we prepare ourselves for arguably the strongest card of the year with UFC 280 just around the corner headlined by a lightweight title matchup between Islam Makhachev and Charles Oliveira. Just how far could Paddy Pimblett go in the lightweight division?

There is no question that Pimblett has made a major impact since his arrival at the UFC. The former Cage Warriors featherweight champion has brought with him an enormous following which has only since grown since signing with the promotion.

Despite having not faced a ranked opponent during his UFC tenure many people believe that Pimblett does have what it takes to reach the top of the lightweight division. Pimblett has received high praise from both active and retired UFC competitors since his arrival with previous title challenger, Michael Chandler, claiming that the Liverpool-based fighter has real potential to reach the top. George St-Pierre also was full of praise for Pimblett following his impressive start inside the UFC and believes the sky is the limit for ‘The Baddy’.

With nearly all of the competitors within the lightweight rankings having recently competed or scheduled to compete it is unlikely he will face ranked competition at UFC 282. However, should he turn in another impressive display to close out the year 2023 could be the year we begin to see just how far Pimblett can climb through the lightweight division.

Who would you like to see Paddy Pimblett face at UFC 282?