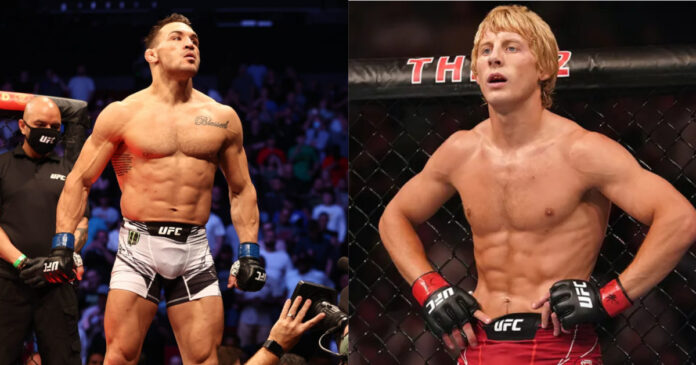 UFC lightweight contender Michael Chandler expects the promotion’s fastest rising star, Paddy Pimblett to climb all the way to the top of the division.

The UFC’s recent return to London saw one of their hottest talents continue his ascent to stardom, as Paddy Pimblett made it 3-0 in the Octagon when he submitted Jordan Leavitt in the second round.

Although Pimblett has amassed a significant fanbase in his short time with the promotion, although the scouser has also drawn many critics who question his ceiling. Media and fighters alike have apprehension about his striking, specifically his defense, as well as how he would fair with higher ranked and bigger lightweights such as Islam Makhachev and Justin Gaethje.

One man though who is confident that Pimblett will continue on his trajectory to the highest heights that the lightweight division has to offer, is fellow 155lber, Michael Chandler.

“He’s great, man,” Chandler said during a media scrum. “Paddy and I have been in contact a little bit. He’s a guy who’s in that perfect – kind of that perfect position where I’m the guy. I’m gonna be the champion here in the next 12 months. He’s going to be nipping at my heels, coming into the top 15, coming into the top 10. But I don’t have a scarcity mindset when it comes to other guys in my division, especially when I see guys who are doing it the right way in my opinion.”

Chandler would continue his praise for Pimblett, remarking that those who hate him on are exactly just that, ‘haters’.

How far do you think Paddy Pimblett will rise?