LowKickMMA.com
Home ONE Championship News ONE: Heart Of The Lion Preview & Analysis 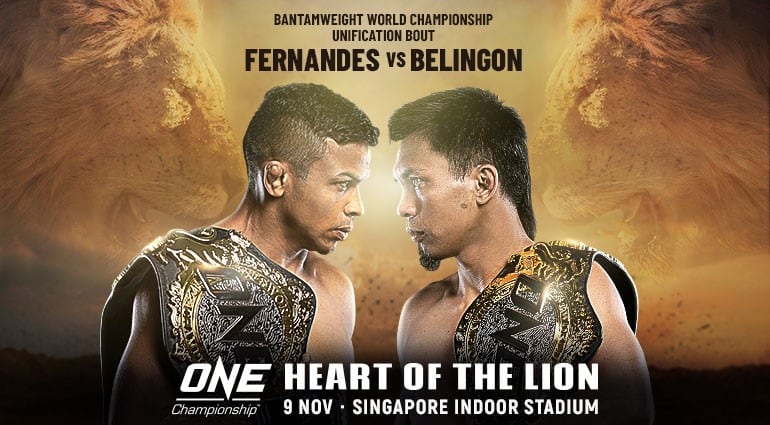 ONE Championship’s Singapore cards are the promotion’s flagship events. The company is known to bring out its big guns whenever it touches down in the “Lion City” and ONE: Heart of the Lion is no exception.

Despite the loss of the headline title bout between Angela Lee and defending strawweight champion Xiong Jing Nan, the 14-bout card remains stacked with an array of potentially explosive matchups.

The evening’s main event between bantamweight champion Bibiano Fernandes and interim champion Kevin Belingon for the unified ONE Bantamweight World Championship is shaping up as  a fight of the year contender. Fernandes, the most dominant champion in the promotion, has ruled the ONE bantamweight division with an iron grip for over a half a decade.

Still, age catches up with all athletes no matter how talented and the 38-year old, who is coming back from injury, appears to be entering the twilight of his career. It just so happens that this is occurring at the same time as Belingon is coming into his prime.

Belingon, always regarded as one of the sharpest strikers in the division, previously fought Fernandes for the title back in 2016. A first-round submission loss to the Brazilian exposed holes in Belingon’s ground game, sending him back to the drawing board.

The Filipino put in the hours, and the results speak for themselves.  The 31-year-old is undefeated since his 2016 loss and enters this bout on the back of a six-fight winning streak. 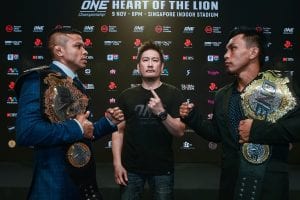 It feels risky to bet against an athlete as experienced as Fernandes, but it is hard to see Belingon not leaving the cage with the belt given the form he has been in lately.

The night’s co-main event is a late notice affair due to the cancellation of the strawweight title bout.

Singapore’s Christian Lee, Angela Lee’s younger brother, will take on Japan’s Kazuki Tokudome in what should be an intriguing matchup. At only 20 years of age Lee, is one of the top athletes competing in the featherweight division. However, 2018 has not been the best of years for “The Warrior.”

Lee is on a two-fight losing streak after falling to Martian Nguyen in their title clash back in May and was then disqualified due to an illegal suplex in his return bout with Edward Kelly.

The loss to Kelly would have cut Lee particularly deep as up until his disqualification he had been winning comfortably. Tokudome, a recent arrival from Pancrase, should provide Lee with a stern test. The 31-year-old, who also fought under the UFC banner, will be looking to make a statement in his most high profile ONE Championship appearance to-date.

A victory over the hometown hero would go a long to helping Tokudome establish himself as a legitimate title contender.

Outside of the main and co-main events, the card is filled with solid matchups.

Brazilian jiu-jitsu wunderkind Garry Tonon will enter the cage for the third time in his career when he takes on Sung Jong Lee in their featherweight clash. The 27-year-old Tonon, a five-time Eddie Bravo Invitational champion, is still in the early stages of his mixed martial arts career.

While his stand-up is still levels below his grappling, Tonon’s willingness to mix it up on his feet gives his bouts an air of unpredictability.

Striking fans will be well looked after with four Super Series bouts going down on the night. The must-see fight out of the four will be the return of Giorgio Petrosyan.

The 32-year has one of the most storied resumes in kickboxing and will face off against Sorgraw Petchyindee Academy, a Lumpinee Stadium Muay Thai World Champion.

In one of the opening bouts of the night, Muhammad Aiman will look to continue his excellent form in his bantamweight clash with Shuya Kamikubo. Aiman has earned a reputation as a dynamic stand-up striker and is someone who always brings something new to each fight

The strawweight clash between former Singapore boxing champion Tiffany Teo and eight-time BJJ world champion Michelle Nicolini is without a doubt one of the cards hidden gems. Both women have recently spent time away from the spotlight as they worked on improving their skillset and it will be interesting to see what each of them bring to the cage on fight night. A dominant win for either athlete could set them up for a title shot in 2019.

Due to its recent signings, ONE has been in the news a lot recently, and ONE: Heart of Lion should serve as the perfect introduction for new fans looking to begin following the promotion.

The full card will start at 6 PM Singapore time and can be watched for free via the ONE app.

Check out the full lineup here: