LowKickMMA.com
Home UFC News Nick Diaz Faces Off with Robbie Lawler Ahead of UFC Return at... 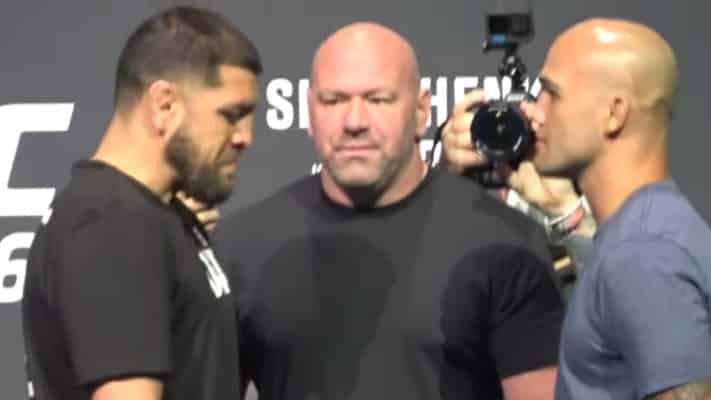 Former UFC welterweight title challenger Nick Diaz is just days away from his highly-anticipated return to the octagon at UFC 266, and the moment felt that much more real as he faced off with Robbie Lawler at the pre-fight press conference.

Diaz returns to the octagon after six years away from the sport, undergoing multiple suspensions stemming from a positive drug test following his last fight against Anderson Silva. He lost by unanimous decision but the result was overturned after Silva also tested positive for PEDs.

Diaz faces Lawler in a rematch of their first fight 17 years ago, and fans were excited to see the two UFC legends come face-to-face ahead of their matchup.

In their first matchup back in 2004, Diaz pulled off a major upset against a surging Lawler with a big knockout. He was able to survive an early barrage from Lawler to find his range on the feet and cement his name as a star in the UFC.

Nick, along with his brother Nate are two of the biggest names in MMA overall. Whenever they fight, there’s usually a huge group of fans who follow them and support them at events.

Diaz, at 38 years old, is looking to turn towards a new chapter in his UFC career and beat a quality opponent in Lawler. Since their first matchup, Lawler has earned the welterweight title and been active year after year.

Diaz vs. Lawler was originally planned to take place at welterweight before a last-second request by Diaz’s camp made the fight at middleweight. The reasoning for the last-second switch in weight hasn’t been told to the public.

There are two title fights after Diaz vs. Lawler but the fight is considered in some ways to be the ‘people’s main event’.

What is your prediction for Nick Diaz vs. Robbie Lawler 2 at UFC 266?