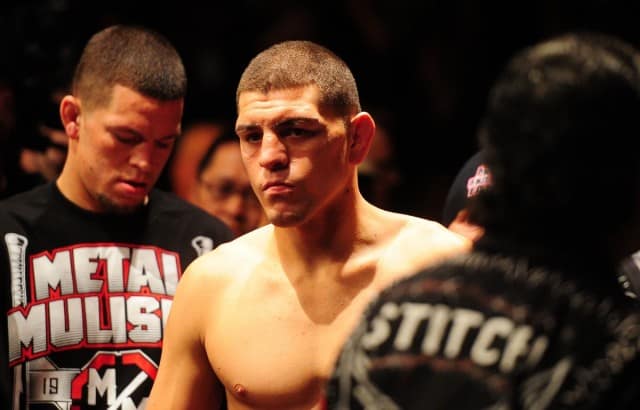 With the mixed martial arts (MMA) world up in arms about the Nevada State Athletic Commission (NAC)’s decision to suspend popular bad boy Nick Diaz a ludicrous five years for his third failed drug test for marijuana, some evidence has arose that allegedly casts a light of further hypocrisy on the shamed Commission.

Soon after he was dealt the shocking sanction by what he called a ‘dork court’ on Wednesday (September 14, 2015) Diaz tweeted out an article from The Las Vegas Review Journal concerning NAC Commissioner Anthony Marnell III:

Apparently Marnell, who said it was ‘not a question of if, but how much’ when giving his deliberation following a painstaking hearing based on what appeared to be highly fact-based criticism of the NAC’s testing procedures, the commissioner’s own involvement with marijuana has been brought to light.

And not surprisingly, he was trying to profit from it rather than smoke it.

Apparently Marnell was denied a medical marijuana license for a company called Clear River LLC, which he owns 71 percent of and sought to open a dispensary within the state of Nevada. But his owning of a Nevada gaming license lead to him being denied that license, citing conflict with the fact the Federal government still views the distribution, possession, and sale of marijuana to be a crime.

When it was declared that no Nevada gaming licensee would be able to sell medical marijuana, Marnell quickly complied with the State’s decision:

“A gaming license is hard to earn and it’s hard to keep. We need to comply with regulations in order to keep that license. We are the most vetted people in Nevada. Nobody is more qualified than a Nevada gaming licensee.”

Marnell and his licensed associates from the gaming industry argued that they were in fact the most qualified applicants for marijuana licenses because they had already been thoroughly investigated by the State.

However, the State did not agree, believing that if a gaming licensee were to be arrested for selling marijuana, it would obviously reflect poorly on their industry.

As far is Diaz is concerned, this seems like a contradiction of massive proportions. Marnell wanted to know ‘how much’ Diaz was smoking, but he chose to deny the negative results of two post-fight drug tests that could have proven how much the fighter did or not did not use. The Commissioner wanted to profit from the sales of medical marijuana, which only recently began being distributed in Clark County, and Diaz in fact has a medical license for pot in California.

It appears that doesn’t factor into play here, though, as Marnell found it perfectly fine to attempt to profit from a substance that Diaz effectively had his career end because of.

True, rules are rules, but at what point will the NAC be forced to examine the facts objectively and not offer contradictory messages when it comes to drug testing in combat sports?