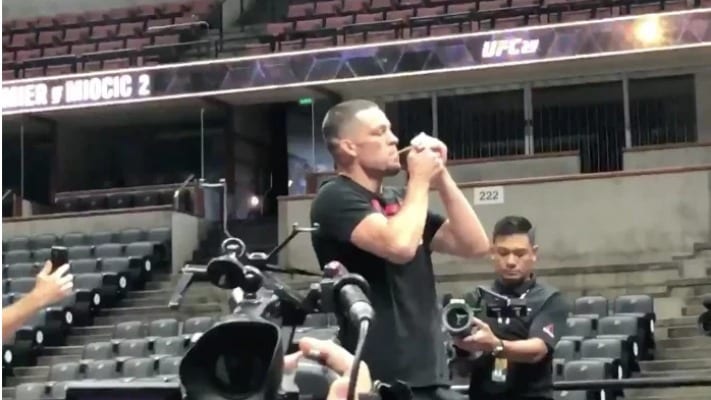 Yesterday (Wed. August 14, 2019) Nate Diaz got the mixed martial arts (MMA) world talking when he sparked up what looked to be like a joint at his UFC 241 open workout.

Diaz will be taking on Anthony “Showtime” Pettis in the co-main event of UFC 241 on pay-per-view (PPV). The former lightweight spoke to the media after and was asked about the substance he was smoking. Diaz revealed it was his own line of CBD from Game Up Nutrition. ESPN’s Marc Raimondi also cleared up some concerns about the matter.

He noted that CBD is allowed in and out of competition, however, it’s THC that is prohibited while in-competition, which Diaz was not intaking.

“Diaz said the joint was CBD, his own line from Game Up Nutrition. CBD is legal in- and out-of-competition in the UFC’s anti-doping policy. Diaz said he’ll have to save the THC for after the fight since it’s prohibited in-competition.”

Diaz will be ending a three-year layoff against Pettis this weekend. He hasn’t fought since his 2016 decision loss to Conor McGregor at UFC 202. Now, Diaz has decided to stick around at welterweight, and will take on the former 155-pound champion in his first fight back.

What did you think about Diaz sparking one up at UFC 241 open workouts?