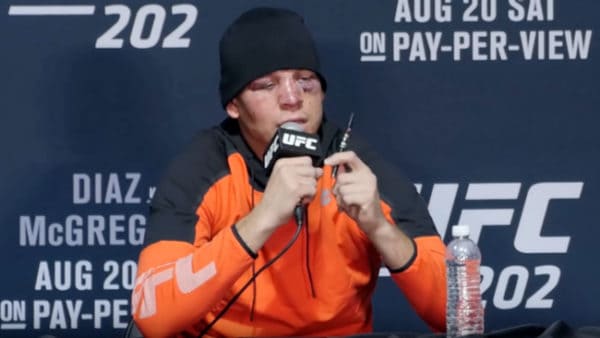 With the first four months of this year devoid of fights that drive fans’ interest, the collective MMA world was wishing Nate Diaz would finally reveal a blockbuster return when he spoke to Ariel Helwani on a special episode of “The MMA Hour” today.

But the opposite is unfortunately true, as Diaz revealed he hasn’t spoken much with UFC President Dana White nor the new owners at WME-IMG, so rumors of him facing Tony Ferguson for an interim lightweight title while Conor McGregor chases a boxing match with Floyd Mayweather are just that – rumors:

“Dana White, we haven’t talked too much. That’s why I’m saying; I wonder what’s their deal, and what they wanna do. I’m hearing rumors and I feel a lot of pressure, people always like tell me this. I’m fighting Ferguson, and I’m doing this, and Conor’s sitting out, and Conor’s manager sitting there saying I need to impress someone. I’m like, what the fuck? You guys need to fight each other and impress me. The real gold’s right here. It’s funny to me how Conor McGregor’s manager says I need to light a fire under McGregor’s ass to get a third fight. The real champ is right here. They can light a fire under my ass.

The younger Diaz brother previously stated he would only return for a trilogy match with McGregor, a bout he wants $20 million to participate in. With no concrete plans – or even preliminary discussions – to return to the octagon, Diaz expressed his anger at McGregor’s attempt to fight Mayweather, citing his belief that everyone seems to have forgotten he submitted the Irishman in their first meeting at March 2016’s UFC 196:

“Conor is a fucking bitch. He got choked. If Floyd beats Conor who cares, I already beat his ass. Everybody seems to have forgot what happened. I don’t even want a third fight. Fuck Conor. He can go fuck himself. I don’t owe anybody any favors. I’d like to be treated with a little bit more respect.“

Diaz then stated his intention to sit out for the rest of 2017 without an offer on the table. Even if you think he has to fight to make money, he said he absolutely does not. With a whole host of lucrative opportunities available in the commercial cannabis industry, Diaz said the weed world is simply throwing cash at him, showing a jar of Kush to Helwani:

“In one year I got the two biggest selling pay-per-views in UFC history. I’m not going to die off. The cannabis industry is throwing money at me.”

Diaz was reportedly offered a fight with former champion Eddie Alvarez at next week’s UFC 211, but actually took offense to the offer, which he insisted Alvarez turned down on the first place based on the onetime Bellator champion’s performance against a man he submitted earlier last year:

Diaz also said he would fight Alvarez for $20 million, a number guaranteed to be shot down in today’s ultra cost-conscious UFC landscape.

So with McGregor still chasing Mayweather and Diaz not planning to return anytime this year, two of MMA’s biggest stars sit idle as the UFC continues to stumble through each dragging, uninspired week of promotion – even if the actual fights in the cage have delivered some hard-hitting action as of late, albeit to little fanfare.

Should the promotion’s new owners bite the bullet and get out the checkbook to pay Diaz what he wants, or is their brand of hardball actually getting them somewhere?