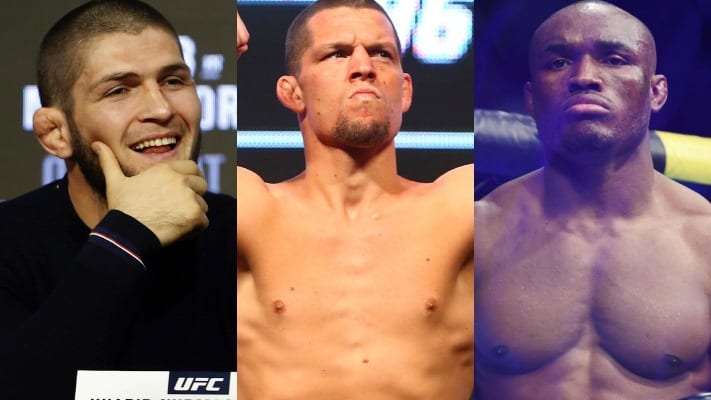 Nate Diaz is not particularly interested in fights with respective lightweight and welterweight champions Khabib Nurmagomedov and Kamaru Usman.

Diaz returns to action this weekend at UFC 241 when he takes on Anthony Pettis in a welterweight contest. It will be his third-straight fight at 170 pounds following his last two outings against Conor McGregor. However, Diaz certainly has potential matchups in his old lightweight division as well.

But any matchup he takes now has to be one that interests him, and fights with title-holders in Nurmagomedov and Usman don’t, at least in comparison to McGregor or Pettis.

“I feel like I’m just better and cooler than those guys,” Diaz told ESPN of Nurmagomedov and Usman. “What the hell do I want to fight them for? Pettis is cooler than both of them fight-wise. You know what I’m saying? Do you remember Street Fighter? ‘I want to see that guy vs. that guy.’

“Or even at school when you knew two guys would kick ass and you were like, ‘I wonder what would happen if them fools fought?’ So I think of it from that perspective, too. If I were somebody who wanted to watch me fight in the UFC, I would want to watch me fight Conor or Pettis.

“[Jorge] Masvidal just did his thing the other day, that was great. You know, stuff like that. With all due respect, it motivates you to want to fight that person because they’ve done some great sh*t.”

Do you agree with Diaz? Or would you like to see him fight Nurmagomedov or Usman?