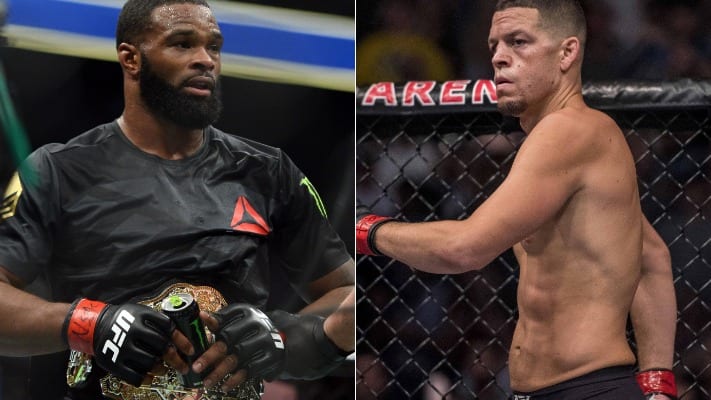 Nate Diaz has been away from the Octagon for nearly three years. That’s all about to change this weekend (Sat. August 17, 2019) at UFC 241 on pay-per-view (PPV).

The Stockton native will return to face Anthony “Showtime” Pettis in the co-main event of the evening. Ahead of the fight, Diaz recently sat down with ESPN’s Brett Okamoto for an interview to preview the upcoming bout, and discuss his long layoff from the sport. During the conversation, Diaz talked about his inactivity and why he hasn’t fought in so long.

With the notion being presented by the UFC that Diaz is consistently turning down fights, Diaz noted that most of the offers he received from the Las Vegas-based promotion were “lame.” However, there were some he was down for, but the UFC either failed to meet the Californian’s monetary expectations, or the fights simply fell through. One fight that didn’t take place, Diaz reveals, was a short-notice 170-pound title fight with Tyron Woodley.

Diaz was down to face “T-Wood” on short-notice for the welterweight strap, but it sounds like the UFC wasn’t able to pony up enough money to get Diaz to sign on the dotted line.

“So, why am I going to fight for these people and go out of my way to try and fight when it’s like that?” Diaz asked. “And what I’m saying is, is that, with all the criticism that I got for not fighting too, especially for any fighter talking, you’re out of pocket. Shut your a** up, I still have more fights than any of you not fighting.

“Like, I never called you guys, like ‘Can I fight Khabib and Conor and “GSP?” Can I fight Tyron Woodley?” That fight [Woodley] fell through because, they were like, short-notice, I’m 172 pounds, 174 pounds. They were like, ‘Hey, you want to fight welterweight title in like f*cking three weeks or something?’

“And I’m like yeah, lets do this, but yo, give me some – we gonna have to money up for this. But I’m with it whenever and I showed up, too. I’m like, I’ll pop up and do my thing. And then, that’s how that fight went.”

Now, Diaz will face Woodley’s longtime teammate and friend in Pettis. The pair will co-headline UFC 241 on pay-per-view (PPV) this weekend from the Honda Center in Anaheim, California, in what’s likely the most anticipated fight on the card.

Would you have liked to see Diaz face Woodley for the welterweight title on short-notice?