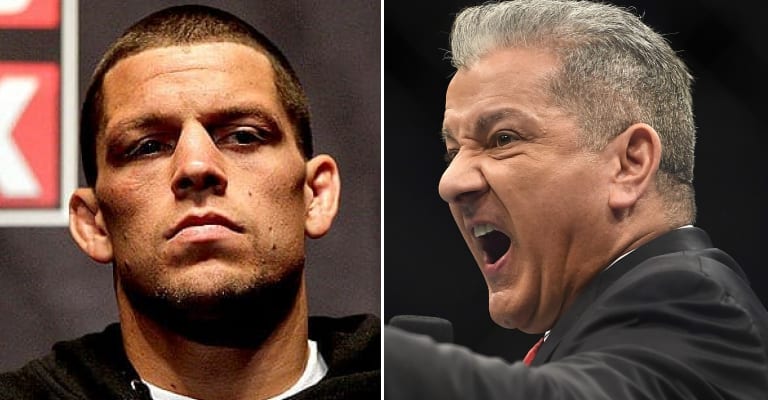 It hardly a surprise that Nate Diaz claps back at Bruce Buffer.

The longtime UFC announcer recently dissed the polarizing MMA star by claiming he should be ‘bowing down’ to UFC president Dana White.

Buffer’s words don’t sit well with Diaz. He hopped on social media to blast back at the voice of the octagon tonight:

Bruce Buffer wtf get off the Ufc nuts your bowing down right now tellling me to bow down? fuck that u keep bowing down.
I Bow down to no one ever
for alll the money n the world…

It’s the usual hard-line stance from Diaz. He affirmed he takes directions from no man. It’s a strategy that has gained him many a fan due to his outspoken personality. He’s now set to return against Dustin Poirier at November’s UFC 230. The pay-per-view event should be huge because of his presence.

However, Diaz has also begun to draw some criticism in the fight game. He is set to return, but likewise, it’s far from set in stone.

The Stockton slugger was expected to only return for his long-rumored trilogy with Conor McGregor. The press conference where McGregor’s return was also announced was a source of discord for Diaz. He walked out of it and tweeted he was no longer fighting. Maybe he wants to fight the best at lightweight, maybe it’s in order to set up the McGregor rubber match.

It seems like one thing is for certain. Diaz wants to be back in the limelight. If he’s making the kind of money Buffer claims, he has several million reasons to. MMA’s most infamous bad boy is back, so fans can only hope he actually fights.