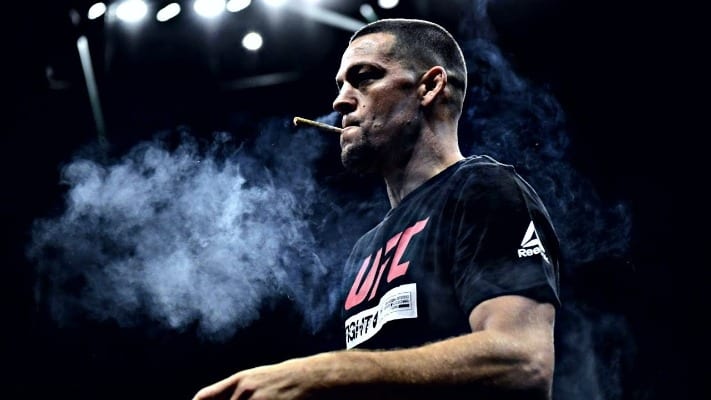 Nate Diaz is getting paid this weekend for his Baddest Mother F*cker Championship fight against Jorge Masvidal. The pair headline UFC 244 on pay-per-view (PPV) from Madison Square Garden in New York City.

The card is arguably the biggest of the year and will attract a lot of eyes. That means more cash for Diaz and Masvidal to pocket. Speaking to media this week, Diaz claims he’ll never have to fight again after this weekend. However, he hates not fighting and not being active. (H/T MMA Junkie)

Diaz is more than willing to stay extremely active year after year, but he’s not going to accept a fight just for the sake of fighting again. He wants an opponent that excites him, and it’s slim pickings in that department for the moment.

“I’ll take forever off, or I’ll get back to it if anybody comes correct,” Diaz said. “The only reason we’ve had problems in the past is because you better treat me like it’s supposed to be. I’ve been in this game forever doing my thing regardless of outcome. I’m coming back my next fight stronger, better anyways.”

The Stockton slugger admits that fighting is the best thing for him and his life, but at the same time, it’s very self-destructive. However, Diaz suggests it’s just as self-destructive for him when he doesn’t fight.

“I think (fighting) is the best thing for me,” Diaz said. “It’s weird because it’s self-destructive fighting, and it’s self-destructive not fighting. Kill or be killed. Like I said before, it’d kill him with it, it’d kill him without it. I don’t want to do this (expletive) at all, but sitting back watching somebody else do it is not comfortable for me.”

What do you think about Diaz claiming he never has to fight again after UFC 244?