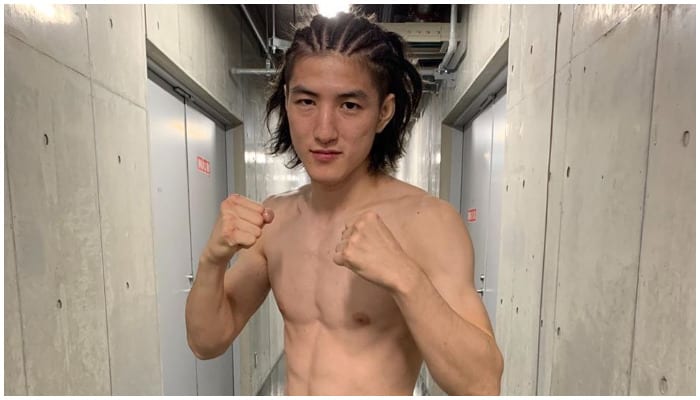 RIZIN FF returns this week with the Japanese promotion set to hold its first show of 2020. RIZIN 21 will take place on Saturday, 22 February, inside the Hamamatsu Arena in Hamamatsu, Japan.

Headlining the 12-bout card will be a 68kg catchweight bout between Japan’s Mikuru Asakura and Mexico’s Daniel Salas. RIZIN 21 will also feature the anticipated promotional debut of Naoki Inoue. The Japanese submission specialist is set to share the ring with Australia’s Trent Girdham, setting the scene for a classic grappler vs. striker duel. Both fighters share similar stats on paper, and their fight looks set to be one of the more intriguing matchups of the night.

“Same age, same record, he is a good striker, and he has a good strong base, so it’s not going to be easy to take him down, is my impression of Trent,” Inoue said to Lowkick MMA.

“He is going to be the first southpaw I am going to fight in my career so for this fight camp, I did spar, hit pads with southpaws, and I am still in the process of building the strength needed to be bantamweight, so I have been working a lot on gaining physical strength.”

Inoue’s recent decision to sign with RIZIN along with his move from flyweight to bantamweight will ensure that he keeps a full dance card in what is one of the most stacked divisions in the promotion.

“I think RIZIN has the best bantamweight division outside the UFC. The talent pool is very deep, and all of them are world-class fighters, so I am honored to be able to fight for RIZIN,” he said.

“In the future, I would like to get an opportunity to fight the world’s top fighters like Kyoji Horiguchi, Kai Asakura, and the current champion Manel Kape.”

After taking up martial arts at age seven, Inoue soon felt the pull of MMA and turned pro in 2014. His impressive performances brought him to the attention of the UFC, where he racked up a 1-1 record before parting ways with the company. Inoue’s talent meant it was only a matter of time before he returned to the world stage. After a first-round submission victory at DEEP 93 in December, he soon found himself signing a deal with Japan’s biggest MMA promotion.

” In the world of MMA, I think RIZIN has the best presentation. Their format is geared towards entertaining fans, so I always wanted to fight for RIZIN, so I am very happy that I got to sign with the promotion,” Inoue exclaimed.

Japan has always been one of the spiritual homes of MMA, and Inoue believes that RIZIN will be the promotion that shapes this era of Japanese MMA.

“Right now, in terms of the Japanese MMA scene, it all depends on how RIZIN is going to do, is how I feel.

“Also, there are fighters from RIZIN that has signed with [the] UFC, and if those fighters do well in the UFC, I think the world will recognize more about RIZIN. So, right now, I think the Japanese MMA scene is starting to get hot again.”

Inoue has plans to compete four times in 2020, giving him plenty of opportunities to showcase his skill set in the RIZIN bantamweight division, and this weekend’s bout should provide fans with a taste of what is to come from this young talent.

If you’re a fan who wishes to follow Inoue’s MMA journey in more detail, you can check out his YouTube channel, which he runs with his sister.