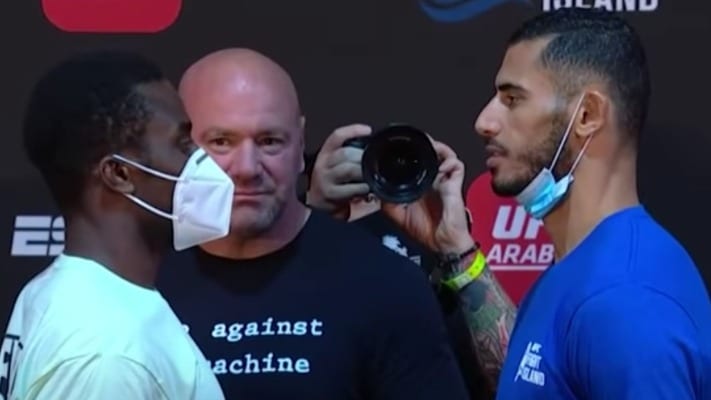 Kicking off the UFC Fight Island 1 main card is a welterweight bout between the returning Abdul Razak Alhassan and Mounir Lazzez.

Round 1: Lazzez starts off with a leg kick. Alhassan responds with a number of punches and has Lazzez backed up against the fence. He is now unloading on Lazzez who is shelling up. Lazzez finally gets going and stops the barrage. Alhassan blocks a head kick. Alhassan lands a body shot. Lazzez smiles as he receives another punch. Lazzez starts to kick and throw knees more. Lazzez switches things up with some elbows now as Alhassan has considerably slowed down. The tide has clearly turned as Lazzez is the one advancing more. Alhassan throws some leg kicks, though some were checked. Lazzez lands a body shot and follows it up with a head kick that partially lands. He lands an uppercut soon after. Lazzez times a takedown right at the end of the round to end it strong.

Round 2: Lazzez chips away at the legs with calf and teep kicks. Lazzez seems to have hurt Alhassan and loads up on him. He unloads a flurry and Alhassan goes all out swinging. Nobody is seriously hurt and the right continues. Lazzez lands a knee and then times another takedown well and is in side control. The referee stands them up soon after. Lazzez lands another knee to the stomach. Lazzez lands a number of elbows as he has Alhassan backed up to the cage. He lands another takedown. Alhassan threatens with a choke from the bottom but is unable to threaten much. The referee stands them up again before the second round ends.

Round 3: Alhassan lands a big leg kick and is starting to jab more. Lazzez’s footwork, however, is on show. He lands a big knee as Alhassan shoots for the takedown. He is able to get him to the ground but only momentarily. He gets him down again but Lazzez gets up soon after. Lazzez switches and lands a takedown. Alhassan looks to threaten with another submission attempt but to no avail. Lazzez lands some strikes before Alhassan gets up and looks for the finish late on but is unable to.