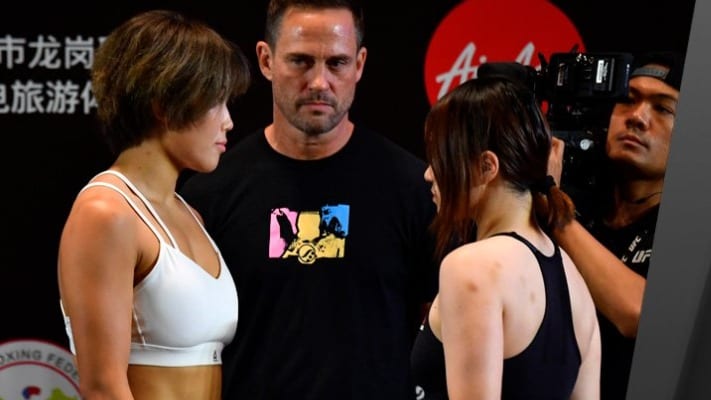 Next up on UFC Shenzhen is a women’s catchweight bout at 129 pounds between Wu Yanan and Mizuki Inoue.

Lots of feints from both women early on. Mizuki is staying busy but nothing of significance is landing for either woman. Mizuki connects with a couple of short hooks inside the pocket and Wu keeps her at bay with leg kicks. An overhand just connects for Mizuki and Wu continues the leg attack.

A nice body shot lands from Wu, who continues to circle around. Mizuki continues to press the action, but Wu landing nicely inside the clinch before they separate. Wu connects on a nice hook to separate another clinch up. The round comes to an end.

A big shot from Mizuki lands, which rocks Wu a bit. Wu blasts back with a body kick followed up by a leg kick. They clinch, Mizuki goes for a takedown, and Wu goes for a standing guillotine but she loses it. A failed trip takedown for Mizuki before they separate and Wui lands an elbow on the way out. Mizuki connects with a left hook. A nice couple of elbows land for Mizuki inside the clinch and they separate.

Mizuki lands a nice jab. Wu fails on a takedown and Mizuki makes her pay with a strike that lands crisp on her way backward. Mizuki puts together a few shots now. Mizuki had a good opportunity for a trip takedown but missed it. Mizuki with a nice right hand to end the round.

Mizuki cracks Wu with a nice shot as she came in for a takedown. Nice jab from Mizuki connects. Wu feints a takedown and connects on a hook. Very nice head movement from Mizuki being shown as she gets in and out of the pocket with ease after connecting on her combos.

Wu was in on a deep takedown attempt but Mizuki defended nicely. Mizuki steps in with another nice combination connecting. Wu lands nice shots after a clinch separates. Mizuki lands a hard 1-2 combination, but Wu puts together a nice combination in response, which ended with an elbow. Hard kick to the body lands for Wu. Both women are exchanging some big shots as the final seconds wind down.

Wu lands nice elbows inside the clinch and a game of rock ’em sock ’em robots breaks out as time expires. Tremendous fight.