LowKickMMA.com
Home Boxing News Mike Tyson Will Fight Again: ‘I’ll Be Better In The Next One’ 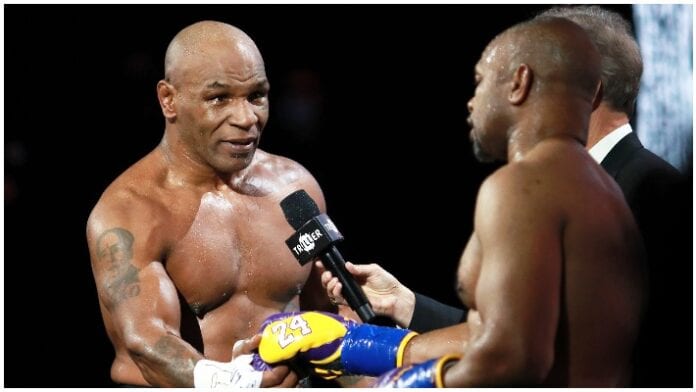 Former heavyweight champ Mike Tyson has vowed to fight on after competing for the first time in 15 years on Saturday night.

‘Iron Mike’ looked sharp as he squared off against Roy Jones Jr. in the headline fight of a Triller pay-per-view event. Tyson was relentless in pursuit of ‘Captain Hook’ over eight, two-minute rounds but was unable to find the knockout blow.

The WBC celebrity judges shockingly declared the fight a draw. Despite not getting the result he deserved Tyson was happy with his performance and immediately began talking about “the next one”.

“I was just happy to go the distance with him. That’s real fighting, having the endurance. You’re not going to knock everybody out. I used to go for the quick kill. I’m training for distance now. I don’t expect to win. I expect to go eight rounds and entertain the crowd.”

The 54-year-old is elated to be back in boxing after so long out of the sport.

“I don’t think it’s a mid-life crisis with me,” Tyson said. “I think it’s my ego and my ego tells me to do things I’m afraid of doing. I’m very happy I did this. I will do it again.”

Tyson is using his ring return to raise money for charity and is determined to keep helping as many people as he can.

“Anything is possible. The sky is the limit. I’m capable of helping a lot of people all over the world,” Tyson said.

“The old Mike Tyson no longer exists. This is a better cause for me. I’m here for a purpose. I never liked who I was. I like who I am now.” (Transcribed by Boxing Scene)

Do you want to see Mike Tyson fight again?