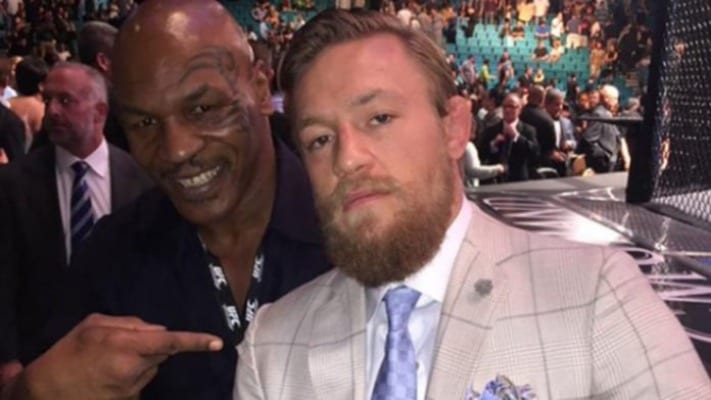 Conor McGregor has found it difficult to hold things together outside of the Octagon. The Irishman has been involved with several legal issues stemming from breaking the windows on a UFC fighter bus, smashing a fan’s phone, and punching a middle-aged man in an Irish pub for insulting his whiskey.

“Notorious” just can’t seem to stay out of trouble, but with his latest incident in punching the man inside a bar, McGregor came out in an interview and apologized for his actions, vowing to better himself. One fellow combat sports legend who knows a thing or two about out-of-competition shenanigans is former boxing heavyweight champion, Mike Tyson. Tyson was a guest on “The Ariel Helwani MMA Show” yesterday (Mon. October 7, 2019).

Tyson offered up some words of advice to the former UFC dual-weight champion. (H/T ESPN.com)

“Conor has to look inside himself and [say]: ‘What happened? Why am I the way I am? And how do I stop this from continuing to be?'” Tyson said.

Tyson went on to point out that a big reason why we see stories like this, with high-level athletes, often, is due to the sudden acquisition of fame and fortune. The rapid influx of cash and notoriety for someone not familiar with that lifestyle can be overwhelming to some.

“All of a sudden you start fighting, doing something you love to do, and you do it easily and all of a sudden they give you a lot of money for doing it. But you have no restraint, no control, you don’t know what to do. You give it away. You buy people gifts that don’t deserve gifts. You just don’t know what to do with it. You feel you don’t deserve it.”

The heavyweight legend pointed out that those who surround McGregor are just as confused.

“They don’t know how to figure it out,” Tyson said. “They never had it, either. It’s almost like you don’t feel deserving of it. I don’t deserve this, I’m nobody. How come I deserve this? I would do this for nothing.”

What do you think about Tyson’s advice for McGregor?