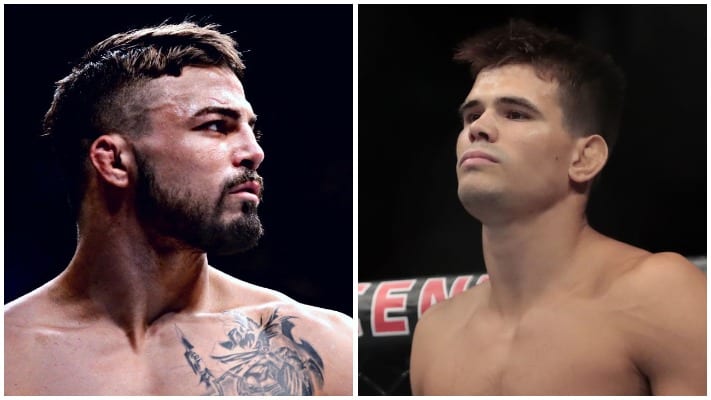 Popular welterweight Mike Perry will return to the octagon later this month to face off against Mickey Gall according to reports. Brett Okamoto of ESPN broke the news on social media telling fans that according to his sources the welterweight pair will hopefully square off on June 27, he wrote.

“Breaking: UFC working on a fun one for a UFC Fight Night on June 27. Mickey Gall (@mickeygall) vs. Mike Perry (@PlatinumPerry) is in the works, per sources.”

Perry is currently riding a two-fight losing streak after falling short against Vicente Luque and being stopped by rising contender Geoff Neal. ‘Platinum’ recently revealed he would be making some extensive changes to his training team ahead of his return to action, he claims come fight night he will only have his girlfriend in the corner with him.

“My girlfriend, just her,” Perry said. “If not, her and her friend.

“… I’m not listening to any coaches right now. Coaches who are saying things that they ain’t gonna go in there and do. They want it to be this way or this way, and like it’s a totally different way. I need a guy like me to hold mitts; I want to hold mitts for myself to be honest with you. I can show people a couple of techniques or whatever, and I’m just ready to fight for my life. … Ain’t nobody gonna take this from me.”

“All I need the corner for is to pass me the bottle of water,” Perry said. “Wipe my head off or put the ice on my neck when I get hot coming in between the rounds. It’s probably not gonna go more than five minutes, and if it does, all I need is a bottle of water. I need to sip a drink, put some ice on my neck, and I don’t need no advice.

Gall will be looking to make it two wins in a row after beating Salim Touahri by unanimous decision at UFC Newark in August 2019. Prior to that, he was stopped by Diego Sanchez in the toughest test of his career to date.

Who wins if Mike Perry fights Mickey Gall on June 27?