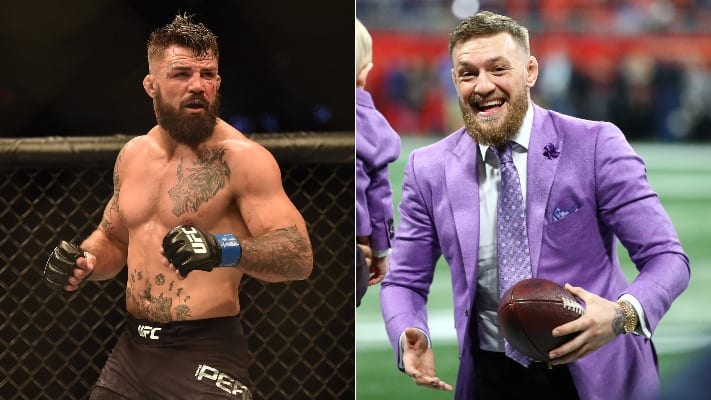 Mike Perry is not a fan of Conor McGregor, and he’s tired of hearing about the Irish star.

Recently, McGregor took part in an interview with ESPN’s Ariel Helwani, which has been picking up quite a bit of attention from the media. Perry was scrolling through his Instagram when he came across a bit of footage from the ESPN interview. Perry decided to leave the following comment on the clip.

“Shut UP already with this damn interview. Why ask us to click a link and watch the whole thing if you’re gonna post it already. I’ll fight his spoiled ass on UFC Tampa with a busted nose. I’ll beat him with his own left hand. SHUT UPPPP.”

McGregor has been in quite a bit of legal trouble over the past few years and has come under a lot of fire for recently punching a 50-year-old man in a pub for refusing a drink of his very own Proper 12 Irish Whiskey. As for Perry, he comes off of a controversial split decision loss to Vicente Luque at UFC Uruguay.

Perry busted his nose up pretty badly during the bout, and will likely need to be sidelined for a good amount of time before returning.

What do you think about a potential fight between Perry and McGregor? Could that ever become a possibility?