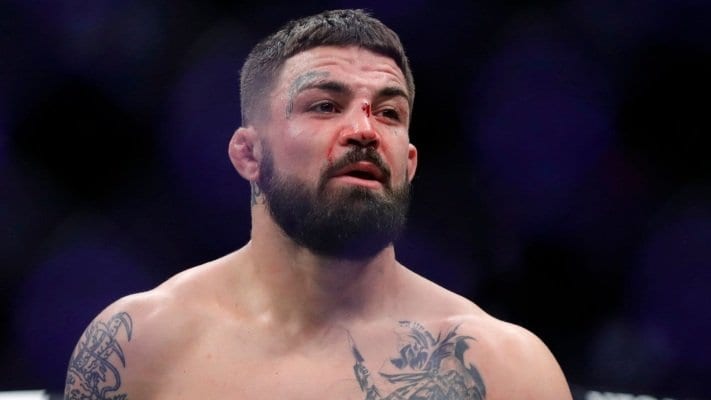 Mike Perry has his eyes set on eight fighters.

Perry returned to the win column in June with a decision over Mickey Gall. After the fight, a disturbing video was released of him punching an old man and using profane language. The UFC then said he would not be getting offered any fights until he got help.

When he does return to the Octagon, Perry already has his eye on eight fighters as he created a death wish list (via MMA Mania).

The eight fighters on Mike Perry’s death wish list are Niko Price, Nicolas Dalby, Daniel Rodriguez, Emil Meek, Khamzat Chimaev, Michel Pereira, Mounir Lazzez and Darren Till. In the photo he writes “All 8 of these fighters have made the same death wish, to die at the hands of “Platinum” Mike Perry in the cage, and Mike is happy to grant that wish.”

The biggest name on the list is Darren Till, and it should come as no surprise. The two have traded shots at one another and Till even made a website called MikePerryisabum.com and made several troll Instagram accounts.

Mike Perry even said he would go to jail in order to beat Darren Till up on the street.

“I don’t even want to give that dude the time of day until we can make it happen. Everybody is like ‘oh why did you block him?’ or I’m ‘scared’ of him. No, the thing is, I’m scared of myself!” Perry said. “You want to play with me over the internet because you would never say these things to my face! Nobody would! Nobody could! Because I would f—king do something about it. I don’t care who you are! I don’t give a f—k! Nobody gonna play with me in my life like that.

“Social media is not real time! You want to f—king play, and I’m not going to forget about it. If I could see this motherf—ker in the street, I would do it for free! If we are ever in the same place, at the same time, I will go to f—king jail for beating the brakes off of him, if he wants to be a little p-ssy boy and press charges on me.”

Whether or not Mike Perry will fight any of those eight fighters next time out is to be seen.

What do you make of Mike Perry’s death wish list?