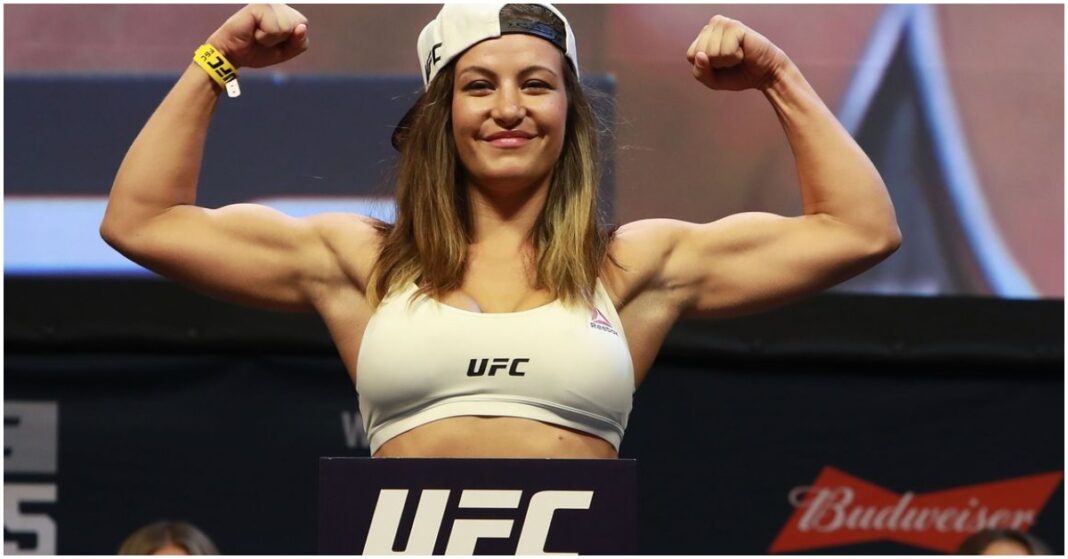 Former UFC Bantamweight Champion Miesha Tate has rejected the idea of starting up a career on OnlyFans. The former UFC & Strikeforce champion recently responded to a fan underlining how she isn’t “desperate” and would therefore never involve herself with OnlyFans.

Miesha Tate referring to using OnlyFans as “desperate” aggravated many individuals, one of those being fellow bantamweight fighter Julia Avila. Responding to a post on WMMARankings, this is what she had to say.

“This is aggravating. Yes women have an only fans and what of it? Maybe they want attention. Maybe they want an extra dollar. Maybe they just WANT TO CELEBRATE THEIR WOMANHOOD AND HOW FUCKING GORGEOUS THEY ARE. it’s not our place to judge or to tear down another woman for it. Fix your crown queen before casting stones on another because, honey, NONE of us are without fault and it’s a hard fucking world without having to tear one another down. 🐼💜 rather than criticizing how about, ‘it’s not for me’, plain and simple.”

“I really hope that this was taken out of context because I’ve always respected her as a role model for other people. So, I’ll give the benefit of a doubt.” (Transcribed by BJPenn.com)

A handful of fighters within the UFC are already using OnlyFans, with many claiming to be gaining serious financial benefit because of this.

Miesha Tate returned from retirement in July where she defeated Marion Reneau via TKO after being away since 2016. Following on from her first bout she would then go on to lose to Ketlen Viera via unanimous decision in November.

After this Tate admitted she is considering the idea of dropping down to 125lbs to continue progressing in her career. ‘Cupcake’ spoke before to say that as her friend Julianna Pena has just acquired the 135lbs title a move down to 125lbs seems to be making more sense for her.

What do you make of UFC fighters having OnlyFans accounts and Miesha Tate calling it desperate?