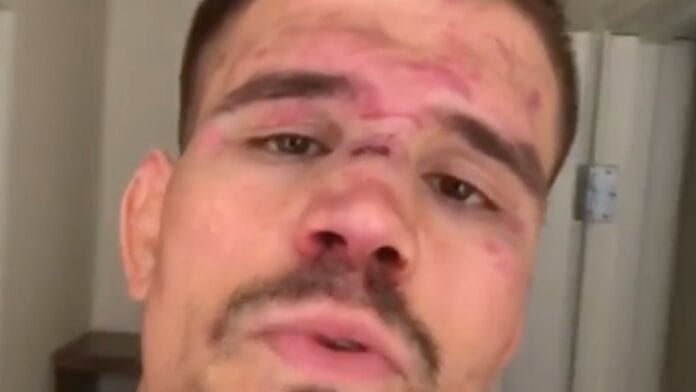 Mickey Gall is holding his head up high following his latest setback.

Gall met Mike Perry in the co-main event of UFC Vegas 4 last night in a highly-intriguing welterweight bout, especially with the latter only having his girlfriend in his corner.

In the end, it didn’t seem to affect proceedings much as although Gall had some promising moments on the feet, he was ultimately outclassed by Perry in every facet of mixed martial arts who even dropped him in the second round en route to a unanimous decision victory.

Gall Says He Will ‘Grow’ From ‘This Little Loss’

It meant Gall once again alternated between wins and losses as he has done so since 2017.

However, he is only taking this loss as a learning experience as he plans on getting right back in the thick of things in August which is when he wants to compete next.

Here’s what he had to say after the fight on Instagram:

“Lost a decision. Fun fight for me. Much love everybody. I appreciate you guys. No excuses. I know who I am I’m holding my head high. I’ll be back in the octagon soon & better than ever. Gonna grow from this little loss. No where in the world would I have rather been tonight. Believe that. See you soon. I’m still full of love and gratitude ❤️ Thanks for the love always (*when the @ufc gets back from fight island to America)”

Gall became famous in the MMA world for being CM Punk’s first UFC opponent as he submitted the former WWE champion with ease when they met in 2016.

However, Gall has gone 3-3 since with his last win coming in August last year when he outpointed Salim Touahri.

What do you think is next for Gall?