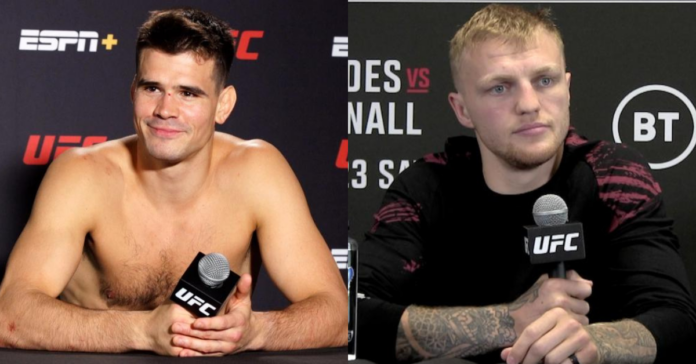 The UFC has said goodbye to Mickey Gall and Mason Jones. However, the US-born Gall has taken to Instagram to deny this. The Welsh fighter Mason Jones on Twitter said that he will take some fights outside of the organization but will be back.

Upon hearing the news of his release from the UFC, Gall on Instagram said:

“Don’t believe everything you read. I have NOT parted ways with the UFC. I did fight out my last contract and have not signed a new one yet. I grew up in the UFC and love the UFC. But I am keeping an open mind and all doors are open. I’m still young and very hungry. I will keep you all posted trust me.”

Mickey Gall had a 6-5 record in the UFC since making his debut in 2016. Along the way, he has defeated fighters such as Mike Jackson, CM Punk, and Sage Northcutt. The 30-year-old welterweight sounds as though he is still highly interested in competing within the UFC.

‘The Dragon’ Mason Jones, of Wales, is a fan favorite for good reason. While only having a 1-2-0 1 NC record in the organization, this 27-year-old lightweight fighter had some highly entertaining bouts against fighters such as Mike Davis and David Onama.

On Twitter, last week, ‘The Dragon’ explained that he will step away from the UFC but promises he will eventually be back. He explained:

“As most you know, I’ve fought my UFC contract out. I wont be re-signing with UFC this side of this year and may take some fights outside the org before returning to keep you all entertained.”

Some fans were surprised and disappointed with the release of these two MMA fighters. Mickey Gall is on a two-fight losing streak however, ‘TheMMABulldog’ on Twitter was let down to see him go. This person Tweeted:

“How is a 6-5 record in the UFC worthy of being released? Two loss streak rather than the three that’s expected for a release? They doing [Mickey Gall] dirty here he’s got at the very least a recognisable name.”

Upon hearing the news of Mason Jones being let go from the organization, ‘RoyalzMMA’ explained the injustice. This person Tweeted:

“Mason had a war with Mile Davis, NC against Alan Patrick who he was destroying, win over Onama and a loss to a legit good fighter in Klein that isn’t very fair on him lol”