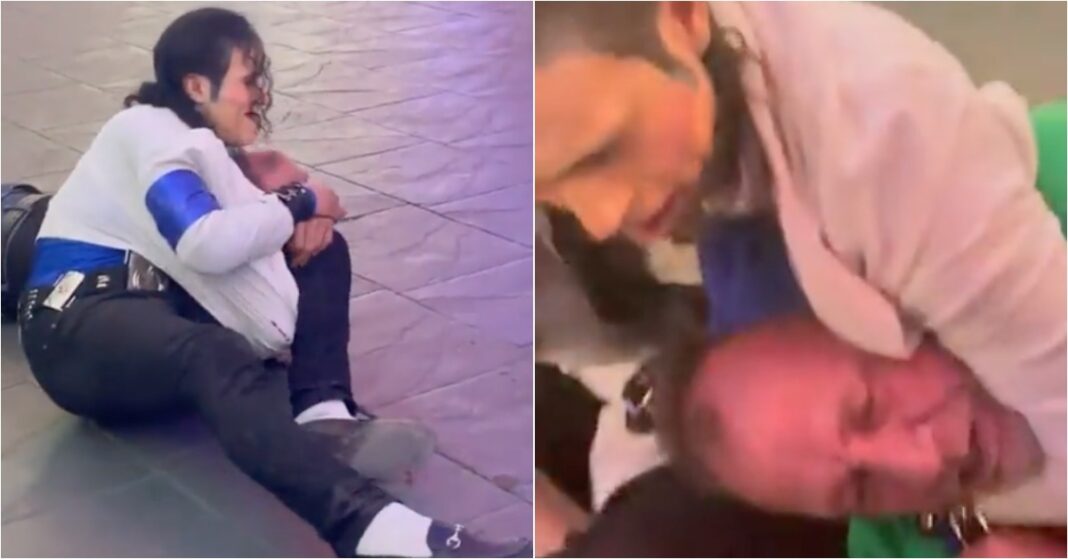 Footage has emerged over the weekend, of a Michael Jackson impersonator on the Las Vegas, Nevada strip – subduing a man who appears to be intoxicated, utilizing a swift outside trip before eventually wrapping up a bulldog choke, and an omoplata.

Shared on Twitter by podcaster, Marcus Deegan, the Michael Jackson impersonator receives a frail outside leg kick attempt from the intoxicated man – who is sporting a green t-shirt, with the text, ‘Can’t Fix Stupid’, before securing a swift takedown courtesy of a well-timed outside trip.

Initially stacking the guard, the Michael Jackson impersonator soon establishes full-mount with very little defense from the man, now on bottom position, appears to be attempting to grab the Jackson impersonator’s jacket lapel, almost as if it were the collar of a Brazilian Jiu-Jitsu gi.

However, unable to maintain control, the Jackson impersonator quickly attempts to lock up a mounted triangle, and even threatens to tie up an armbar to boot – reminiscent of Amanda Nunes’ submission win over Megan Anderson last year, before he eventually loses his balance.

Defending by now pulling the locks of the Jackson impersonator, from top position, he elects to bail on the triangle attempt, and during the ensuing scramble, almost takes the back, but fails to establish either hook and instead bellies out his opponent and latches onto a bulldog choke.

READ MORE:  Jason Wilnis Wants To Fight Both Israel Adesanya & Alex Pereira In MMA After Beating Them In Kickboxing

Shortly thereafter, the Jackson impersonator, with the bulldog choke more than secured, traps the assailant’s right arm between his leg, in a half-hearted omoplata, before bystanders eventually break the scuffle up.

Returning to his feet, after assessing the situation for some time, with teeth gritted, the intoxicated man appears to welcome an immediate rematch, before footage draws to a close.

Footage of the impromptu street fight even received the breakdown treatment from mixed martial arts commentator and analyst, Robin Black who shared his analysis across social media.

With the UFC set for another active period from the Apex facility in Las Vegas in the coming months, who knows if the ‘King of Pop’ impersonator will find himself locked inside the Octagon.