LowKickMMA.com
Home UFC News ‘Michael Chandler could be undefeated if he wasn’t focused on entertaining fans’... 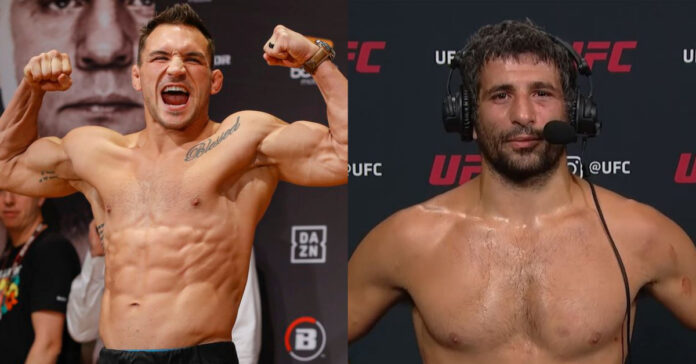 Beneil Dariush believes that Michael Chandler would be undefeated if he had a better mindset.

Chandler is coming off a historic win over Tony Ferguson in May at UFC 274. He became the first athlete to knock Ferguson out cold with a vicious front kick to the face. He is set to face Dustin Poirier in his next bout at UFC 281 on Nov. 12 at Madison Square Garden in New York.

‘Iron’ Mike has delivered entertaining shows since joining the promotion last year but failed in his quest to become the lightweight champion when Charles Oliveira beat him in Dec. 2021.

In a recent interview with Helen Yee, Beneil Dariush suggested that Michael Chandler would be undefeated if he didn’t aim to put on a show for the fans.

“I think if it’s three rounds, 60-40 I lean towards Dustin,” Dariush said (BJ Penn.com). “Only because Michael Chandler’s focused so much on being exciting, I think he actually gives up a lot of his skill sets. I think he could actually do way better than he’s done. I think he’s, what, 2-2 in the UFC? I think he could be undefeated right now if he had a better mindset, but he’s so focused on being entertaining and exciting, he’s lost two fights.”

Chandler has been rallying for a second chance at the 155-pound gold and believes a win over Dustin Poirier in his next bout would earn him the title shot. Dariush does not agree with Chandler and made his case instead.

“Honestly, I think he’s just trying to hype himself up. I don’t think that’s true. But if that does happen, man, that’s basically a clown show. What? The guy just had a title shot and lost and then lost again. So it doesn’t make sense. After I beat Gamrot, I don’t think there’s anyone who could step in front of me,” Dariush said.

Do you agree with Beneil Dariush about Michael Chandler?