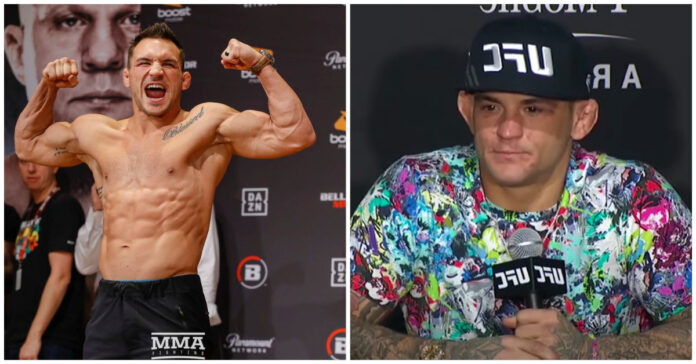 Michael Chandler has ripped into Dustin Poirier for their heated altercation at UFC 276.

Coming off an incredible finish of Tony Ferguson in May, Michael Chandler became the first man to knockout ‘El Cucuy‘. Following his win, he called out a bunch of contenders including Conor McGregor, and Charles Oliveira. However, one name he did not call out was Dustin Poirier.

‘The Diamond’ was not happy with the omission. The two have been feuding ever since with Chandler claiming Poirier dismissed his addition into the UFC.

Michael Chandler rips into Dustin Poirier for a heated exchange

This past Saturday, Chandler and Poirier were both in attendance for UFC 276 at the T-Mobile Arena in Paradise, NV. The pair got into a heated altercation and needed to be separated by security and company staff.

Chandler took to Twitter to criticize Poirier for his actions.

“Simple truth in life – you aren’t yourself when you’re that thirsty. Keep your cool, be a professional, especially in public. Your insecurities are showing.”

In an appearance on ‘The Fight with Teddy Atlas’, Poirier bashed Chandler for not calling him out and claimed that ‘Iron’ Mike knows it will be a tough matchup for him.

“If you’re getting hurt by Tony Ferguson and dropped by (Charles) Oliveira, guys like me, guys like Conor, if we touch your chin, it’s gonna be bad.” (h/t BJ Penn.com)

Poirier further added that he would finish Chandler and highlighted the weaknesses in his game.