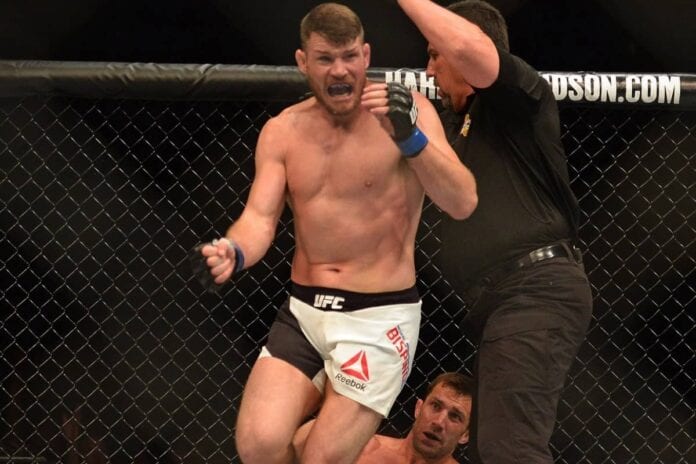 It may have taken Michael Bisping nearly a decade of competing inside the Octagon to earn his long-awaited UFC middleweight title shot, but it didn’t take him too long to get the job done when he did get in the main event of last weekend’s (Sat., June 4, 2016) UFC 199 from The Forum in Inglewood, California.

Now-former champion Luke Rockhold was slated to face off with another former champion in Chris Weidman in the evening’s main event, but Weidman was forced to withdraw from the bout due to an injury. Bisping subsequently accepted the fight with his bitter rival on just two weeks’ notice, and ultimately knocked Rockhold out in the first round.

Rockhold was largely cinsdiered one of the top pound-for-pound fighters in MMA at the time, but Bisping said the exact opposite was true. In the aftermath of the clash, “The Count” called it the ‘easiest night’ of his life:

UFC 199 actually marked the rematch between the two, as Rockhold scored a finish over Bisping back in November 2014. The Brit, however, considered it to be the third meeting, as he has repeatedly mentioned a sparring session where he claims to have gotten the better of Rockhold.

With that being said, “The Count” was eager to land the rematch, and wasted no time in accepting the offer:

“I sparred Luke before, and I know sparring doesn’t count, but I did kind of wipe the floor with him. In the (last) fight he got lucky; he caught me with a nice head kick. I wanted this rematch so bad, and I wanted a title fight so bad. So when the opportunity came on two weeks’ notice, I didn’t even think about it.

“I said going into this fight – I think I’ve always trained too hard in the past. I’ve always overtrained. My power was better tonight because I had a shorter camp. … I could see it coming. I definitely had the speed advantage. He was telegraphing all his shots. I have a mean left hook.”

In Bisping’s mind, his UFC 199 performance was the culmination of years and years of hard work. Simply put, he was able to show the world what he had always knew and believed:

“I’ve always knew I was at this level,” he said. “I’ve had my ups and downs, and I’ve lost some fights along the way. I don’t want to get into the whole performance-enhancing drugs thing, but that was kind of an issue over the years. But I still believed. I always dusted myself off and picked myself back up.

“I know I had a lot of detractors that didn’t believe I was at that caliber, but I want to thank those guys as well. They fueled me on and helped light that fire inside me. I always knew I could do this. I always knew I had punching power. I knew I had the ability, and tonight, of course, I got to show everybody.”