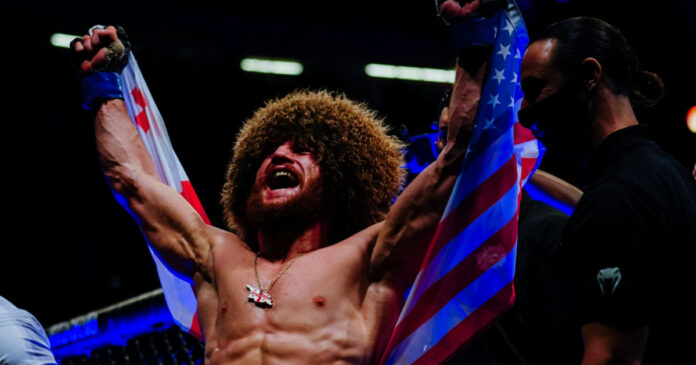 Regarded as one of the best defensive wrestlers in the division and the entire organization today, former undisputed UFC featherweight champion, Jose Aldo – has been met with a wrestling challenge from opponent, Merab Dvalishvili ahead of UFC 278, who promises to take the Brazilian off his feet.

Aldo, the current #3 ranked bantamweight contender, is slated to return to the Octagon later this month against surging Georgian grappler, Dvalishvili – in a potential title-eliminator at 135lbs.

Undefeated in his last two Octagon appearances, Aldo has turned in back-to-back, vintage striking displays en route to a pair of dominant decisions wins over both Pedro Munhoz, as well as a December headlining win against Rob Font.

As for Dvalishvili, the streaking wrestling force has seen injuries hamper his recent activity inside the Octagon – with his most recent outing coming back in September where he landed his seventh straight win with a second round ground strikes win over common-foe, Marlon Moraes at UFC 266. The win earned Dvalishvili a post-fight Performance of the Night bonus.

Approaching the most high-profile matchup of his Octagon tenure to date, Dvalishvili remains confident that he can find a chink in the takedown defense armor of Aldo – who is revered as one of the promotion’s better defensive wrestlers.

A victory for Dvalishvili would likely dislodge Aldo from his #3 perch in the division, as well as land the Georgian his eighth consecutive victory. However, given the fact his teammate – Aljamain Sterling, currently resides atop the bantamweight throne, Dvalishvili is not rushing a show at 135lbs spoils.

“Like I said, I don’t care about the title now,” Merab Dvalishvili explained. “I just wanna win against Jose Aldo, I have so much respect for him. And like, that’s all I want. I don’t care for a title shot, for now – especially at 135, like, my brother, Aljamain Sterling, he’s the king of this division.