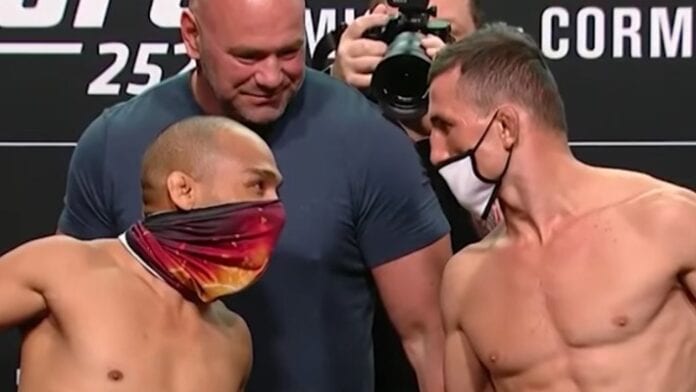 Kicking off the UFC 252 main card is a bantamweight contest between Merab Dvalishvili and John Dodson.

Round 1: Dvalishvili misses a spinning backfist to start things off. A lot of feinting early on as both fighters look to establish range. Dvalishvili misses an upkick. Dvalishvili goes for the takedown with three minutes remaining in the round. Dodson goes down but is on his feet with Dvalishvili controlling his back and landing knees to the back of his thighs. He continues to land knees as Dodson looks to remain on his feet and escape this position. Dodson finally gets free with just under a minute to go in the round. They strike for the remainder of the round but nothing significant. Dvalishvili wins the first.

Round 2: Dvalishvili lands a leg kick. He is jabbing a lot more as he advances. He grabs Dodson’s leg but Dodson remains on his feet. Dodson lands a big inside low kick. Dodson looks to land another leg kick but is countered by Dvalishvili who lifts him up and takes him down. Dodson gets up right away, however, so it doesn’t count as an official takedown. They return to striking. Dvalisvhili partially lands a spinning backfist and follows it up with a big right hand. He has Dodson clinched up against the fence as he looks for the takedown. Dodson is taken down again but gets up right away. Dodson lands another low kick on Dvalishvili. Dvalishvili feints a takedown and lands on Dodson. The round ends with Dvalishvili coming out strong.