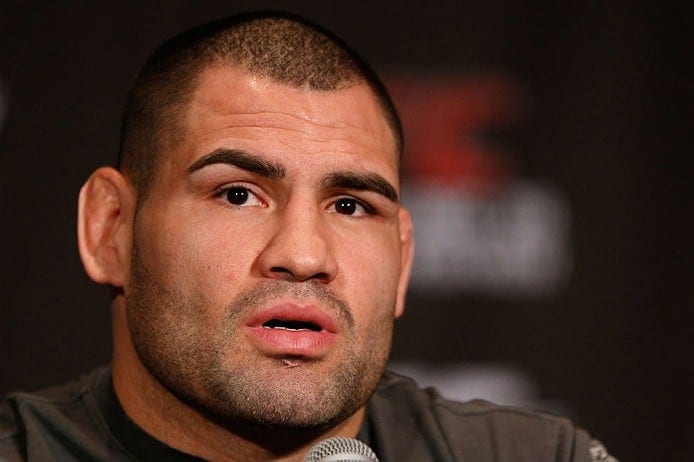 Former UFC heavyweight champion Cain Velasquez had a rather anti-climactic return from his near two-year absence from the sport, as he succumbed to a nasty beatdown and submission at the hands of Fabricio Werdum. It was a coming of age moment for the Brazilian Pride FC veteran, and perhaps more of sharp shock to the dominated Mexican. That was UFC 188, and already Velasquez has his next shot lined up in the form of an immediate rematch.

Many argued after the event in Mexico that Velasquez’s lack of altitude training was the main catalyst in his title loss, there are also those that believe ‘Vai Cavalo’ simply had his number. Either way, we’ll get a definitive answer when the two meet for the second time, where altitude won’t be a factor. Velasquez admitted after the UFC 188 main event that he hadn’t prepared properly and blamed himself, but head coach at American Kickboxing Academy (AKA) Javier Mendez disagrees.

Check out what Mendez told Talking Brawls, as transcribed by David St. Martin of MMAFighting.com:

“Fabricio is a really, really good fighter and you can’t make a mistake. Obviously, it showed. They didn’t make mistakes and we made plenty.”

The do-over between Velasquez and Werdum could either cement ‘Vai Cavalo’ as the true elite champ, or a win for the Mexican would likely set up a trilogy maker and also mark the third time the AKA heavyweight would have won the belt. Continuing, Mendez maintains that the altitude was the sole factor in the loss, and goes in to detail about what he saw of his student that night:

“Going into the fight, one minute into it, when he took Fabricio down, then he gets up and I notice he was breathing pretty heavy and I’m like, ‘Oh, s**t.’ I knew there was problems right there. I went, ‘Oh my god.’ I’ve never seen that from him. I was very concerned going through the fight, he was in trouble the whole time. Nothing we were doing was working. His legs were gone. It was like Fabricio was Superman. ‘Hit me with everything you got, he aint hurting me.’

“That’s exactly what it looked like to me. There was nothing we could have done on that night to win. It was just a matter of time of when Fabricio was going to take that belt that night. Cudos to him. They did the work. That’s what the fight game is all about. You’ve got to be prepared. He did his job. His coaches did their jobs. I didn’t.”

It was certainly quite the title upset as Velasquez was a heavy favorite, even after the lengthy lay-off, and Werdum once again lived up to his frequent underdog status. The same won’t happen next time according to Mendez, as he guarantees an in-shape Velasquez:

“We just have to come in in condition,” said Mendez. “We’ve got to come in the way we were last time. We’re fighting in a different place now. The fight will showcase itself. We’ll see who did their homework that night. In my opinion, we don’t need to do anything other than what we did last time. The only difference was the altitude training. We screwed up there, but it’s not going to happen in the second one because I don’t think we’re fighting in Mexico or in high elevation. We’ll be fine. We’ll just do the same thing we did.”

Who knows what the future holds for Cain Velasquez after UFC 188, he could go on to rekindle the hype he built whilst steamrolling the rest of the heavyweight division, but also might prove his detractors right to a degree, if he gets done over again by Fabricio Werdum.

With altitude out of the equation, do you think the pride of Mexico can snatch back his belt from ‘Vai Cavalo’?