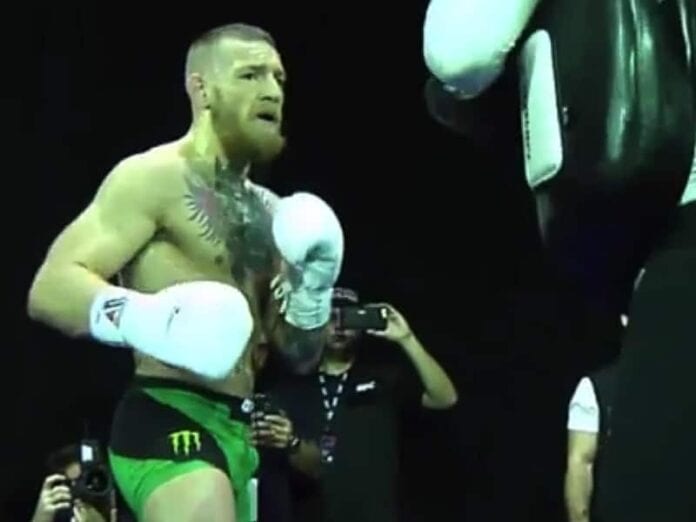 Knockout machine and UFC featherweight champion Conor McGregor will attempt to punch his way towards a second title at November 12’s UFC 205 from Madison Square Garden in New York when he takes on reigning 155-pound champion Eddie Alvarez. After two fights at welterweight against Nate Diaz, the 145-pound titleholder will look to become the first man in promotional history to hold two titles simultaneously, and his striking coach, Owen Roddy, has no issue seeing this taking place.

Although he did note that McGregor will have to prepare for Alvarez’s wrestling, Roddy said on a recent edition of Submission Radio that it’ll only be ‘a matter of time before Alvarez goes to sleep’:

“I honestly never really change my prediction because I see what Conor does day in, day out in the gym. I see how clean his striking is and I see how powerful he is. And I honestly think Alvarez has been dropped a few times and stuff like that. So I mean, that’s not good knowing when you’re going in to fight Conor McGregor. If you’ve been dropped before and you’re going in fighting Conor McGregor, there’s a very, very high chance that you’re going to be dropped again. Alvarez is a great wrestler, so there will be things we’ll be working on with Conor to make sure that Alvarez can’t keep a hold of him, can’t keep him against the fence, but Conor’s gonna land and I think it’s going to be a matter of time before Alvarez goes to sleep to be totally honest.”

McGregor himself also predicted a first round finish over “The Silent Assassin” at last week’s press conference.

As far as the striking department goes, McGregor may indeed hold the advantage over Alvarez, who’s coming off of a brutal stoppage victory over Rafael dos Anjos last July. The Irishman, however, has suffered all three of his career losses by way of submission which could boost Alvarez’s confidence as the champion likely has the superior grappling.

In the end, styles make fights, and this ‘super fight’ should prove to be an exciting contest.

Who do you see taking home lightweight gold next month?