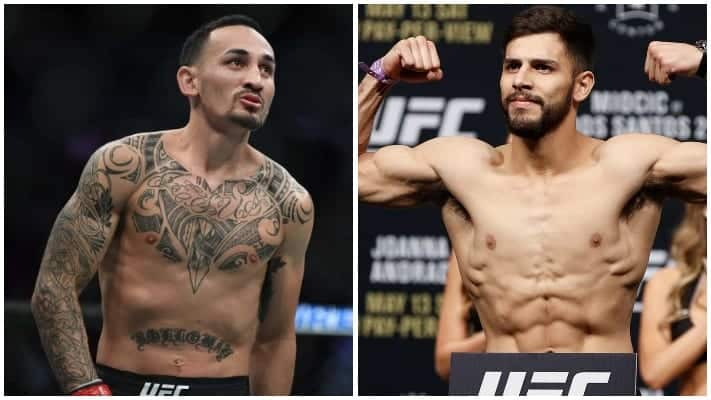 A fantastic featherweight fight between Max Holloway and Yair Rodriguez is set to headline on July 17 according to a report from ESPN journalist, Brett Okamoto.

Holloway appears happy to stay busy as he awaits a shot at the upcoming 145lb title fight between Alexander Volkanovski and Brian Ortega. ‘Blessed’ put on what was arguably a career-best performance when dismantling Calvin Kattar over five rounds earlier this year. The emphatic win came after successive defeats to the current featherweight king, Volkanovski.

At just 29-years-old, ‘Blessed’ has already established himself as one of the best 145lb fighters of all-time. The former champion holds several high profile wins over the likes of Charles Oliveira, Anthony Pettis, Jose Aldo (X2), Brian Ortega and Frankie Edgar.

This summer, he’ll square off against one of the most exciting prospects in MMA. Rodriguez has been around for a while now but hasn’t managed to get the run of fights needed to propel him into serious title contention.

‘El Pantera’ is known for securing highlight-reel knockout finishes and has already beaten the likes of Dan Hooker, B.J. Penn, Chan Sung Jung and Jeremy Stephens during his UFC run.

Rodriguez is set to return for his first fight since October 2019. A mixture of injury, issues with USADA, and a failed match-up with Zabit Magomedsharipov have contributed to his lengthy spell on the sidelines.

Although it hasn’t been expressly stated it appears whoever wins this fight between the #1 and #3 ranked featherweight contenders will be next in line for a shot at UFC gold.

Who do you think will win on July 17? Max Holloway or Yair Rodriguez?