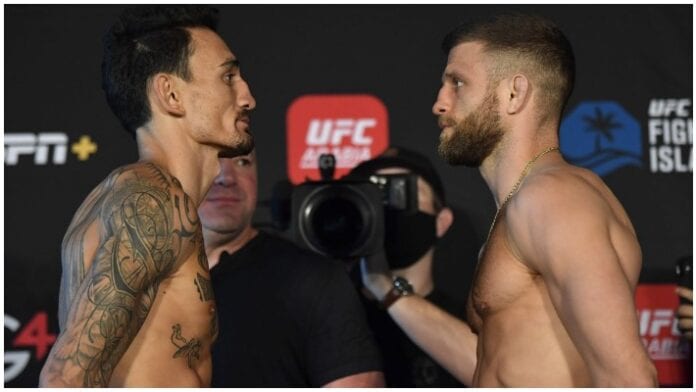 Round 1: Max Holloway is touching Calvin Kattar with jabs early. Kattar lands a nice low leg lick. Another jab from ‘Blessed’. Another leg kick from Kattar. Holloway looks good early here. He’s getting after it in round one. Holloway is lanidng lots of volume but Kattar is having brief moments of success. The former champ is starting to mix in kicks as well now. Kattar lands back-to-back right hands. The fighters exchange leg kicks. Holloway lands then tries to jump in with a knee. Kattar lands another nice shot but Holloway reacts well and puts together several shots. ‘Blessed’ lands a clean spinning back kick to the body. Absolutley beautiful. He follows it up with some nice strikes upstairs. Kattar eats them well but he’s clearly lost this opening round as it comes to a close.

Round 2: Kattar tries to stand his ground at the start of round two but it’s not long before the volume coming from his opponent is too much and he’s forced back. It’s just sheer volume right now that’s overwhelming Kattar who seems to be waiting for the perfect shot. Holloway has Kattar down but it’s not a heavy knockdown and the American pops back up. Kattar puts a few shots together. Holloway reacts as expected by charging forward, throwing a bunch of shots. Holloway leaps in with a lead elbow which rocks Kattar down to his boots. Holloway follows up with a flurry of shots but Kattar stands up to them. ‘Blessed’ comes in again with another huge shot that cuts and wobbles Kattar. Another flurry of strikes but Kattar is still standing – covered in his own blood. Holloway goes upstairs with a kick which lands. Kattar is wobbling but the bell saves him from a certain finish.

Round 3: Kattar despite everything looks fresh at the start of round three. His corner has done a great job of cleaning up the cut. Holloway picks up where he left off and is pinging his opponent with so many shots. Kattar catches him coming in and seems to get a reaction. He follows up with another shot, this is certainly his best moment of the fight. Holloway bites down on his mouthpiece and swings wildly with Kattar. He retakes control of this fight, knocking the head back of his opponent. He’s tagging Kattar who manages to land another big right hand – he’s is still in this fight. Holloway again takes over the round with his volume but he’s for sure eating more shots in this round than any other. Lot’s of bodywork from Holloway who eats an elbow coming in but he’s unfazed. Holloway is getting playful in there. He’s landing at will. Another great round comes to a close. WHAT A FIGHT!

Round 4: Holloway is stepping on the gas at the start of round four. The straight shots are flying and landing as are the body shots. Kattar is game as they come. He’s eating everything and still looks dangerous with the odd shot he throws. Kattar lands a big left hook. Holloway doesn’t move. He hammers home to the body. Kattar returns with a jab. Holloway hurts Kattar to the body. He’s swarming now. Kattar looks ready to go but he continues to swing and land off the fence. Holloway is landing at will. Kattar is all over the place but will not go down. Finally, Holloway lets up and take a break after what seems like an age of relentless output. Kattar is pushing forward and still has pop on his shot but looks vulnerable. Holloway lands a huge head kick up top. WOW. Another epic round. How has Calvin Kattar survived?

Round 5: Holloway is popping out the jab and straight shots at the start of round five. He’s picking his shots abit more now. A straigh down the pipe seems to hurt Kattar again. Holloway doesn’t follow up too much. He seems content picking his moment. Holloway is playing now. He’s talking to the commenatry team and showing off his boxing defence. Holloway continues to talk and shout as he beats up Kattar. This is a crazy scene. Kattar is still game. He’s tring and throwing – even landing but he’s been outgunned here. We go to the judges but its not in dobut.