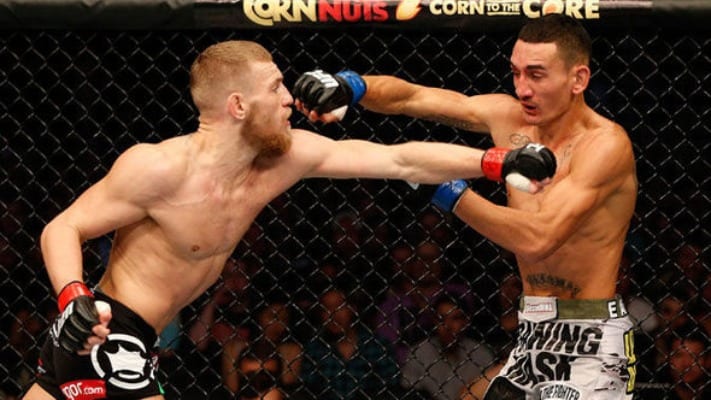 Max Holloway has a lot of respect for former Octagon opponent Conor McGregor.

The pair initially met back in August of 2013, where McGregor defeated Holloway via lopsided unanimous decision. Fast-forward six years later and McGregor is a former UFC double champ coming off a loss to Khabib Nurmagomedov, and Holloway is the current featherweight champion of the world, and arguably the best the weight class has ever seen.

Speaking to media, Holloway was asked about potentially rematching McGregor down the road now that the Irishman is seemingly back in action. McGregor faces Donald “Cowboy” Cerrone in the UFC 246 main event on January 18. Holloway said, if McGregor wants to be the best mixed martial artist in the world again, he’s sure they’ll meet again. (via MMA Junkie)

“We’ll see what happens,” Holloway said. “If the ‘Mystic Mac’ arrives, if he wants to be what he was a couple years ago when he was he was the best mixed martial artist in the world and he wants to do it again, I’m sure we’re going to run into each other or something like that.”

Holloway isn’t sure if a rematch with McGregor will happen or not, but is simply happy to see McGregor back in the Octagon again.

“We’ll see what happens,” Holloway said. “We’ll see if Conor comes. We’ll see if Mystic Mac is back and the way he’s training. But we get to see that fight. So I wish him a great training camp and you know, I can’t wait to see him go back in there.”

What do you think about a potential rematch between Holloway and McGregor down the line?