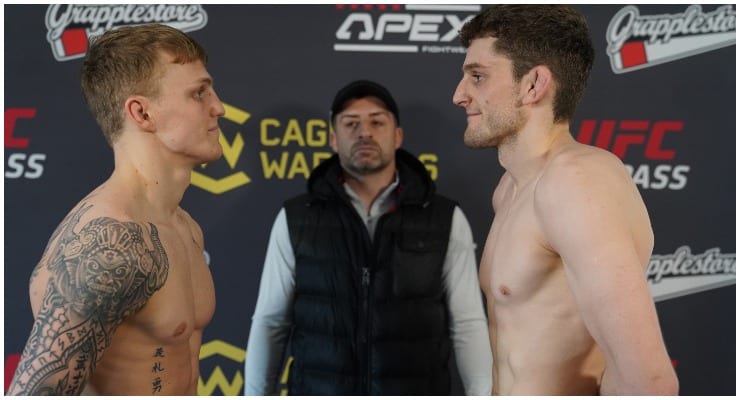 In the co-main event undefeated Welsh prospect Mason Jones finally gets his shot at the lightweight title. He’ll face Irishman Joe McColgan for the belt which was recently vacated by UFC bound Jai Herbert.

Round 1: Both fighters come out firing. After the initial flurry, the fight settles on the fence with Mason Jones controlling the action. Joe McColgan tried to jump up for a guillotine – it doesn’t come off but he forces the separation. Jones begins firing kicks to the legs and body of his Irish opponent. McColgan throws straight back and lands a big body kick of his own. Jones again takes the fight back onto the cage, working for a body lock takedown but he’s unable to secure it. The clock ticks down and Jones is still controlling on the fence. McColgan lands a big knee and separates. Jones doesn’t back up for one second and immediately fires back with two big shots. “The Dragon” drops him with a knee of his own. He pounces on McColgan to claim the stoppage and the Cage Warriors lightweight title.

OFFICIAL RESULT: Mason Jones def. Joe McColgan via TKO in round one