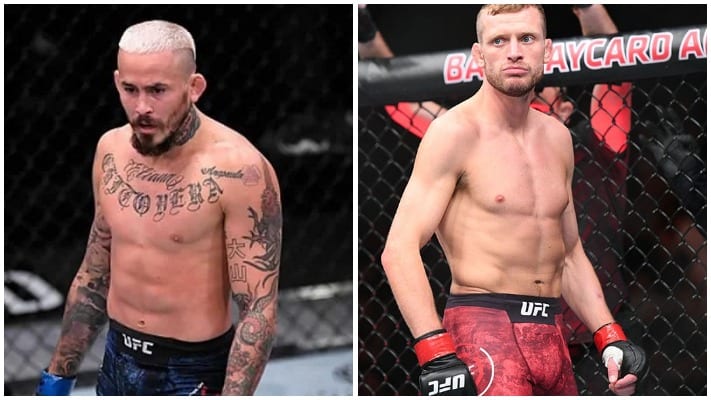 It appears that Marlon Vera will have a chance to get one back from early in his UFC career. He will fight Davey Grant in a rematch scheduled for June.

The bantamweight lost the unanimous decision in his second fight in the UFC to Davey Grant at UFC Fight Night 84 in 2016. Several outlets report that he will get the rematch at a UFC Fight Night event scheduled for June 19th.

Since their first meetup, Vera has remained active. He’s fought 13 times since and put together a 9-4 record. He’s been most successful when he has kept it out of the judges’ hands, with eight of his nine victories coming by knockout or submission. Most notably, he holds a TKO victory over rising star Sean O’Malley. In his last outing, he lost a decision to former featherweight king Jose Aldo. Many anticipated a rematch with O’Malley, but Vera has shared that O’Malley declined the fight.

For his part, Grant has been less active. Since his first meeting with Vera, he’s had five appearances in the octagon and amassed a 3-2 record. He is currently on a three-win fight streak with two back-to-back finishes. Recently, he earned a knockout victory and Performance of the Night honors against Jonathan Martinez at UFC Fight Night 187.

The full card for this event is not yet available. But, it’s rumored that the card will also feature Dan Ige versus ‘The Korean Zombie’ Chang Sung Jung as the main event.

Do you think Marlon Vera will avenge his loss to Davey Grant on June 19?