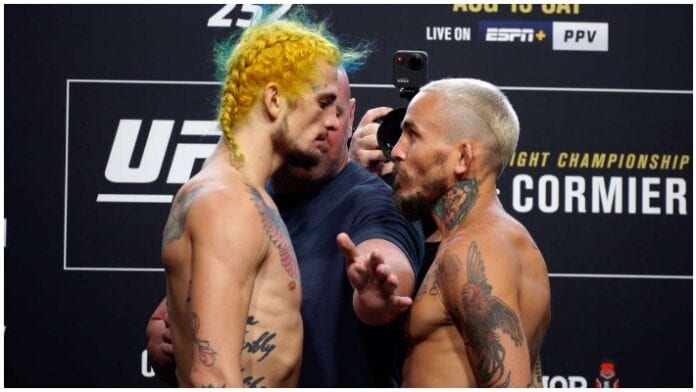 UFC bantamweight Marlon Vera has recently come out and said that he accepted a rematch against rival Sean O’Malley but O’Malley turned it down.

These two met last summer at UFC 252. O’Malley was undefeated at the time and was coming off of a vicious walk-off knockout of Eddie Wineland. Vera had just dropped a controversial unanimous decision loss against Song Yadong but had won five straight before that.

The fight started off with both trying to get each others timing down early on. Vera then started beating up O’Malley’s lead leg pretty bad with calf kicks. Eventually in the first round, O’Malley suffered an ankle injury that rendered him one footed. He would fall to the mat on his back and get finished by Vera with strikes from the top.

After this fight, O’Malley and many of his fans were calling for an immediate rematch because of the injury. Meanwhile, Vera and many of his supporters said the Ecuadorian fighter should move on and move up the rankings to find a new opponent. Both would eventually move on and find different opponents for their next fights. Vera would go on to drop a decision loss to Jose Aldo in December of 2020. O’Malley would not come back until recently at UFC 260, where he knocked out Thomas Almeida.

All of this brings us to where we are today, with the possibility of a rematch rearing its head again. According to Vera, the UFC has already offered him the rematch, which he claims he accepted. Vera also claims O’Malley and his camp have been silent about the bout agreement. He would explain this in a quote tweet about the possible rematch.

With O’Malley coming off of a win and having huge star potential, I see the UFC giving him a bigger name for his next fight. He has recently called out Dominick Cruz and made a whole video about it.

A rematch right now would make sense for Vera, seeing that he is coming off a loss and would love to get another win over a high profile guy that he has already beaten.

Both guys are still young and have many of their prime years of fighting still ahead of them. I think that you have to let both guys build their resumes up again and have them possibly rematch a couple of years down the line.

Would you want to see a rematch between Marlon Vera and Sean O’Malley?