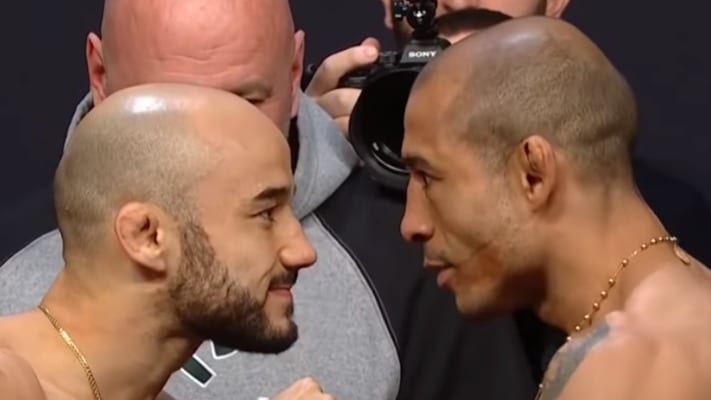 Next up on the UFC 245 main card is a bantamweight encounter between Marlon Moraes and former featherweight kingpin Jose Aldo.

Round 1: Moraes lands a huge switch kick on Aldo’s head. He attempts two more as he certainly gets Aldo’s attention. Aldo lands some strikes as Moraes rushes forward. Moraes attempts another head kick but it’s partially blocked. Aldo is advancing more now as he controls the center of the Octagon. Moraes lands a strong leg kick. The two start to exchange more but nothing significant so far. Aldo is pressuring Moraes against the fence. Moraes hits a strike to the body. Aldo unleashes a flurry and lands big strikes but Moraes takes him down with 15 seconds left in the round.

Round 2: Aldo lands a leg kick but is countered with a straight right. Not a lot of action just over a minute into the second round but it’s Aldo pressuring Moraes. Aldo blocks a head kick. Aldo lands strikes to the body and continues to push forward. Aldo cracks Moraes with some strikes but Moraes responds with his own right. Moraes definitely looks slower now. Moraes attempts a spinning wheel kick but it’s blocked. Aldo misses with a flying knee. Aldo lands an uppercut and continues to overwhelm Moraes with pressure. Moraes lands a big left but it doesn’t seem to affect Aldo. Big round for Aldo.

Round 3: The two hug and smile as the final round begins. Aldo lands another right. Moraes responds with a series of jabs that land. Aldo continues to stalk Moraes and has a smile on his face. Not much action with two minutes left but Moraes continues to be the one backing away. Aldo lands a big right straight. Moraes lands a big leg kick followed by a left hand. Moraes attempts a takedown but it’s stuffed. He does land some strikes as they separate.