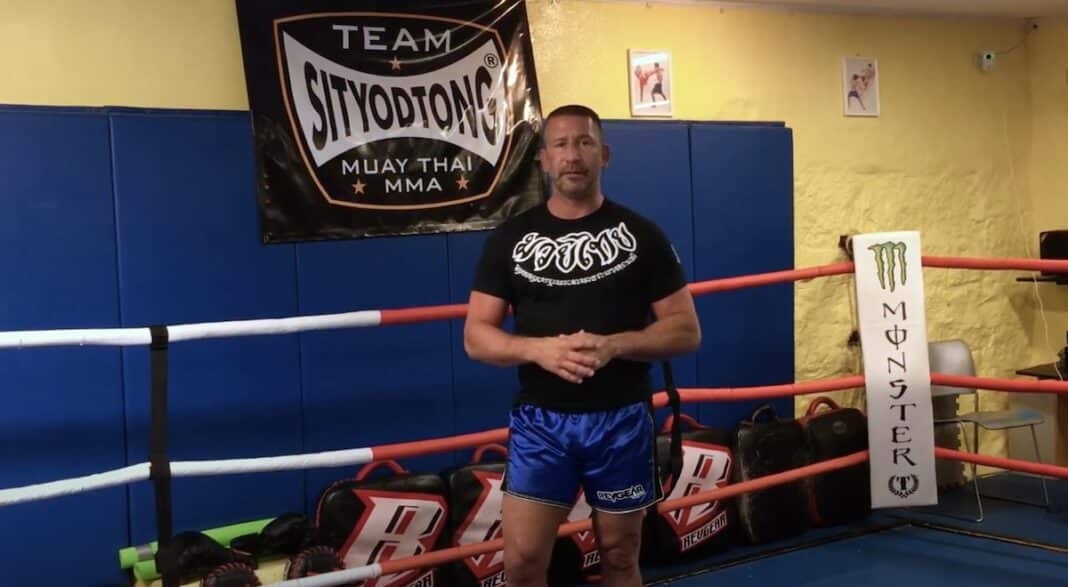 Mark DellaGrotte is a lifelong martial artist who started learning various forms at a young age. Starting out in traditional styles like Taekwondo and Shotokan Karate.

From an early age all DellaGrotte wanted to do was train in martial arts. When he was 18, Mark met martial arts expert Guro Guy Chase.

Chase trained with numerous innovators in martial arts from Karl Gotch, Dan Insonato, and Surachai Sirisute. Surachai introduced Muay Thai to the US and this was the martial art that DellaGrotte took the most interest in.

In 1997 is when Mark DellaGrotte first started learning Muay Thai. He became so immersed into this fighting form that he went to learn the art in Thailand.

His friend that trained there previously and had connections brought him to the Yodtong boxing camp in Pattaya. Owned by world renown trainer Kru Yodtong.

At the time, there were little to no westerners training in Thailand at the time and Mark had to prove himself. Kru Yodtong began taking a liking to Mark DellaGrotte and accepted him as a student.

For 8 years, Mark would spend most of his time in Thailand learning under Yodtong. Mark also traveled across the country learning various fighting styles similar to Muay Thai.

He even learned Thai and is said to have fought in around 10 professional Thai bouts. DellaGrotte competed so that it would make him a better instructor with actual fighting experience.

After learning and training in Muay Thai for 8 years, Master Yodtong Senanan approved Mark as a trainer. Appointing him as a Kru with the duty of teaching and promoting Thai boxing worldwide.

Mark is only one of two US representatives under Master Yodtong. With his certification complete, Mark would open Sityodtong in his home of Somerville, Massachusetts. One of only two Sityodtong gyms in the US with the other being in California.

Mark DellaGrotte began growing his small gym in Somerville into a world-renowned martial arts gym. At first he began training Thai kickboxers, but with MMA growing started getting MMA fighters as students.

Many of which were well known from the Ultimate Fighter reality show like Kenny Florian, Stephan Bonnar, and Alex Karalexis. This recognition as a top trainer of MMA fighters got Mark DellaGrotte an offer to be a trainer of the 4th season of TUF.

His popularity would continue to grow along with his gym. Cornering numerous top MMA fighters in the last two decades.

Also being featured on numerous MMA shows and podcasts like the Joe Rogan Experience. Even getting a role as a trainer in his friend Kevin James’ movie Here Comes The Boom.

Since the early 2000s, Mark DellaGrotte has trained numerous fighters in his time as a trainer. Famous names like Kenny Florian, Stephan Bonnar, Patrick Cote, and Jorge Rivera.

Kenny Florian is one of the original cast members of the Ultimate Fighter Season 1 on team Chuck Liddell. Fighting in the middleweight division, Florian made it all the way to the finals, but lost to Diego Sanchez.

After his UFC debut, Florian would drop down to Welterweight and win both fights at this weight. Then he would move down again to lightweight after the UFC reopened the division.

Kenny would finish Sam Stout by RNC to line himself up for his first title fight against Sean Sherk. He would lose a decision, but would win 6 straight with 5 finishes.

This win streak would put him in line for his second title shot against BJ Penn. Unfortunately he would come up short and lose by RNC in the 4th round.

He would finish his time at lightweight going 2-1 before dropping to featherweight. Beating Diego Nunes and getting his 3rd shot at the title.

Florian would again lose by decision and would retire. Many acknowledge Florian as one of the best fighters to ever fought that never won a title.

Since retiring, Kenny spent time as a color commentator for the UFC and now the PFL.

Mark DellaGrotte was the main striking coach for retired Canadian MMA fighter, Patrick “the predator” Cote for most of his career.

Cote made his debut at just 24 fighting for champion Tito Ortiz in a losing effort. He would trade wins and losses before getting on The Ultimate Fighter: The Comeback.

Patrick would make it to the finals, but lose by submission to tournament winner Travis Lutter. After the loss, Cote would go on the streak of his career winning 5 straight. Earning a shot at the middleweight title against Anderson Silva.

In the fight, Patrick had one of the best performances of his career, but a knee injury ended the fight. He would lose his next two fights and be cut, but would win 4 straight and return to the UFC again.

His final run in the UFC lasted between 2012 and 2017. Going 6-4 in his last 10 fights before announcing his retirement from MMA after fighting Thiago Alves.

Mark DellaGrotte has become one of the most known trainers within the UFC and the sport of MMA. He is known for his thick Massachusetts accent and training some of the top fighters for over two decades.

DellaGrotte’s hard work has earned him immense respect within the MMA community. He has grown his gym Sityodtong into one of the best fight gyms on the east coast.

Mark also works as technical advisor for the UFC and is a fixture at nearly all of their events.