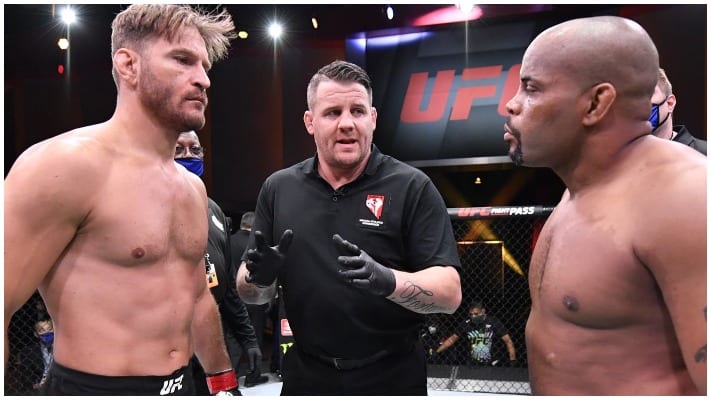 Veteran MMA referee Marc Goddard is one of the very best in the game but he is not perfect and made a very high profile error while officiating a heavyweight title fight at UFC 252. In the third round of the main event between Stipe Miocic and Daniel Cormier, Goddard missed a blatant foul which left the latter compromised for the remaining two rounds. Miocic poked Cormier in the eye. Goddard thought it was a punch and encouraged ‘DC’ to continue fighting. Miocic went on to retain his title by a unanimous decision.

Post-fight Goddard took a refreshingly honest approach to his own performance by publicly apologizing to Cormier for his error. The English official has now opened up further on the mistake he made and why he chose to speak out publicly about it.

“For me, speaking publicly as an official, there’s an old adage that it’s frowned upon if the officials talk,” Goddard told MMA Fighting. “There’s certain people in certain places and certain positions that do not like when officials speak with the media in any description. I’ve never supported that kind of thought because, first and foremost, if I’m ever gonna talk about the sport, and talk about it publicly, nobody has to tell me how to uphold the integrity of the sport. Nobody has to tell me to be professional, nobody has to tell me to say the right thing because I think I’ve demonstrated that many times over the years.

“When it came to the actual thing with DC, it’s just part of me as a person. Acceptance and acknowledgement are big things for me. I’ve always been the same. You can Google my name and there’s a handful of instances where I’ve actually spoken out and said I could’ve done things differently.

“But with something like that in such a pivotal fight, obviously on the replay, it was clear as day what happened. I just felt compelled to do that. It’s part of my acceptance. This is a very personal thing for me and speaking out the way that I did, it meant a lot to me, personally, to be able to accept and acknowledge the fact that I made a mistake.

“I’m not afraid to use the words wrong, mistake, difference, sorry, whatever it may be. That’s just me as a person. Not everyone is the same and it gets me in trouble sometimes with certain people. I won’t stop doing that because from an ethical and a values point of view, it means the most to me.”

Do you want more referees to speak openly like Marc Goddard does?