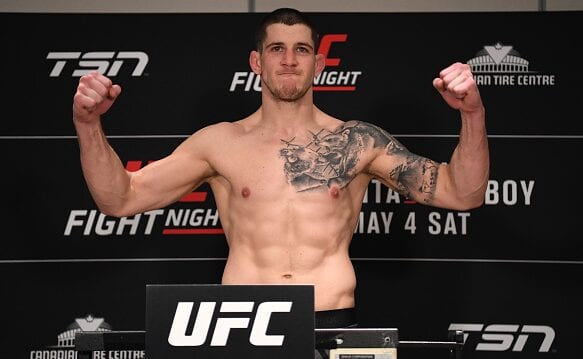 Not long ago we were all given a list of names of recent USADA suspensions, one name of which was Marc-Andre Barriault. He was one of the top Canadian prospects in the sport who came to the UFC in May of last year with a perfect 11-0 record. Though he lost his first three fights with the promotion, all via decision, he picked up his first win inside the octagon at UFC on ESPN 11 against Oskar Piechota.

The only problem with this of course is that he failed his post-fight drug test, testing positive for Ostarine. This has become pretty common within the sport of MMA, fighters testing positive for Ostarine found in tainted supplements, it’s become quite an issue. Tim Means was the first one a few years ago, and since, it’s happened to Nate Diaz, Sean O’Malley, Marvin Vettori, Nicco Montano, Ovince Saint Preux, Augusto Mendes, Thibault Gouti, Amanda Ribas, Rachael Ostovich, Diego Sanchez, and more, all from tainted supplements.

Barriault released the following statement earlier today regarding the matter: “Following a communication from the Nevada State Athletic Commission last week, I wanted to clarify the current situation to all my fans, the medias and everybody involved in the sport of mixed martial arts. (Via MMA Junkie)

“I was notified last week that an in-competition sample that I provided to the NSAC the night of my last fight on June 20, 2020, was positive for an extremely low level (approximately 190 picograms or 190 parts per trillion) of the prohibited substance, Ostarine.

“First and foremost, I want to make things crystal clear, I did not intentionally use Ostarine, nor have I ever knowingly used any prohibited substance in my career. Since the beginning of my professional career, I have been tested three times by the Quebec athletic commission, and a total of seven times under the UFC/USADA program and have always tested negative.

“Since I found out about this last week, I have learned quite a bit about Ostarine, specifically that it is commonly found as a low-level contaminant in certain dietary supplements, often at levels that provide absolutely no performance enhancing benefit. I strongly believe that a supplement contaminant is the reason for my low-level positive, and I am actively working with the UFC on reviewing and testing supplements that I have used prior to my June 20th fight, in the hope of identifying the culprit.

“While I am extremely disappointed in this development, I am looking forward to finding a definitive explanation for my low-level positive test, to fully cooperating with the NSAC and to getting back to work in the octagon soon.”

Jamahal Hill, Tim Elliott, and Luis Pena were also all recently handed suspensions, however, their failed drug tests were for marijuana. Hopefully, USADA can prove Barriault’s supplements to be the reason for the failed test, give them all a brief suspension, and hopefully, they don’t take their wins away and overturn them to no contests. Read more on the three names, disclosing Barriault, mentioned above here.