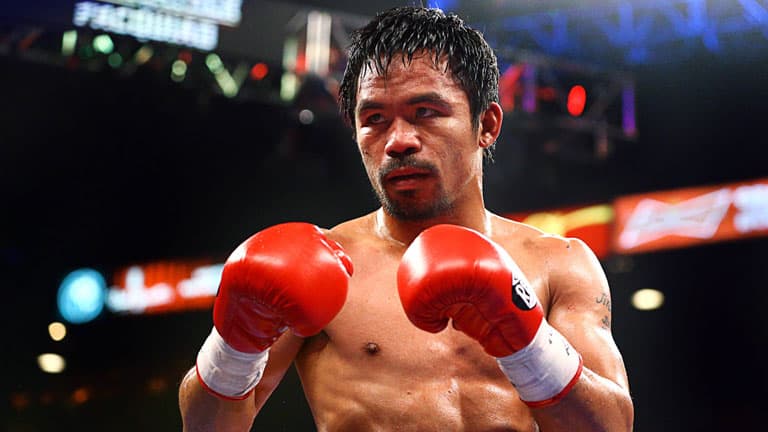 Manny Pacquiao reveals the timeline for when he’ll decide to walk away from the world of boxing that has made him such a superstar. Pacquiao challenged Lucas Matthysse for the World Boxing Association welterweight title on July 15th, 2018. This fight went down at the Axiata Arena in Kuala Lumpur, Malaysia that saw him win by TKO.

The career of Pacquiao has been on a roller coaster of a ride. It started once he suffered a devastating loss knockout loss to great rival Juan Manuel Marquez in 2012. Thus, he has gone 6-2 in his last eight fights. This includes dropping decisions to Floyd Mayweather, Jr in May 2015 and Jeff Horn in July of 2017.

Now, he’s slated to fight Adrien Broner on January 19, 2019 at the MGM Grand Garden Arena in Las Vegas, Nevada. While speaking with TMZ Sports on Wednesday, the boxing legend confirmed that he will retire in three years (2021).

In recent months there has been talking of Pacquiao fighting Floyd Mayweather for a second time. The first fight between them went down on May 2, 2015, at the MGM Grand Garden Arena in Las Vegas, Nevada.

This bout saw Mayweather win the contest by unanimous decision. Mayweather is supposedly set to fight undefeated kickboxer Tenshin Nasukawa. This bout goes down at Rizin 14 on December 31, 2018 under unspecified rules.

No word yet on exactly when this potential rematch will happen or if it’s just a case of Mayweather trying to get headlines again. It’s possible that Mayweather tries to fight the winner of Pacquiao vs. Adrien Broner next.