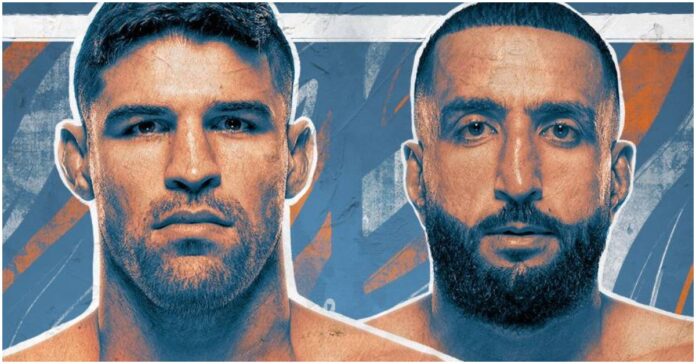 At UFC Fight Night: Luque vs. Muhammad, the world’s top MMA promotion returns to the Apex Arena with a card headlined by an electric welterweight rematch between two of the division’s stand-out fighters.

Whilst the undercard may not be as stacked as some of the more recent Fight Night cards, there are still a number of intriguing matchups that have a lot of value to sharp-eyed bettors.

Join LowKickMMA as we preview, predict, and hopefully win some money betting on UFC Fight Night: Luque vs. Muhammad.

A rematch five years in the making see’s top-ranked welterweights Vicente Luque and Belal Muhammad once again lock horns, this time in the main event slot.

Vicente Luque, who came up on top in their first fight, is once again the favorite. Betway currently has him priced at 1.57, whilst Muhammad sits as a 2.40 underdog.

Belal has improved exponentially since the first fight, but it is hard to overlook the finishing ability of Luque. We are going to go with Luque ITD at a 2.05 betting line.

Two contender series alumni both make their UFC debuts in this middleweight matchup. As a result, there is somewhat more limited tape to study than usual.

However, Omargadzhiev’s wrestling prowess should be enough to see him through in this one. Borralho loves to embrace the grappling side of things, quite often to varying degrees of success. Should the fight go the floor, even if it is by Borralho’s efforts, expect Omargadzhiev to quickly take control and begin to dominate the fight.

Pat Sabatini is a heavy favorite in this fight and with good reason. Currently undefeated in the UFC, Sabatini has picked up extremely convincing wins so far against the likes of Tucker Lutz, Jammall Emmers and Tristan Connelly.

Sabatini takes on TJ Laramie, who is stepping up on short notice to face Sabatini. Laramie is currently 0-1 inside the UFC, having been submitted by Darrick Minner in his debut.

Due to his heavy favorite status (1.22 on Betway), there is little logic to take Sabatini as a single bet, but he should be a solid piece of your UFC Fight Night: Luque vs. Muhammad parlay.

Another heavy favorite who is a logical addition to your parlays would be Drakkar Klose. Curretnly sitting as a 1.18 favorite to win, he takes on Brandon Jenkins who is looking to pick up his first wins inside the UFC.

Klose has proven on numerous occasions that he is capable of competing with some of the divisions very best, having overcome the likes of Bobby Green, Lando Vannata and Marc Diakiese. Jenkins simply hasn’t fought this level of competition yet. As a result, we will predict Klose to win comfortably in this fight.

A Parlay with Drakkar Klose, Pat Sabatini, and Mounir Lazzez (who also takes on a short notice opponent) will give you a plus money 2.21 bet.

Who are you taking for UFC Fight Night: Luque vs. Muhammad?