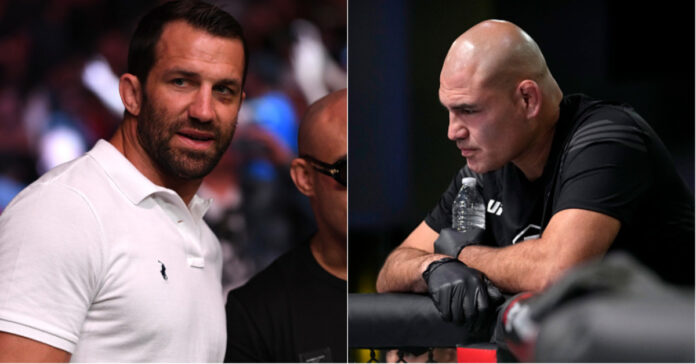 Former UFC middleweight champion Luke Rockhold will make his long-awaited return to the Octagon against Paulo Costa at UFC 278 in August.

Ahead of his return to the cage, Luke Rockhold spoke with MMA Fighting’s Damon Martin to discuss his preparation after nearly three years on the shelf. Training out of American Kickboxing Academy in San Jose, CA, the same gym that Cain Velasquez calls home, the conversation eventually turned to the alleged shooting that has left Velasquez in jail without bail since March.

“It’s just hard to watch him grow and his family grow and you know, been through the years, the heartbreak and the amazing times we’ve had,” Rockhold said. “To see his family not have him over a system that has failed us is not fair. It sucks. It’s just not fair.”

On February 28, Velasquez is accused of firing multiple times at a vehicle carrying three individuals. One of them, the alleged target, Harry Goularte is currently facing child molestation charges. The victim was Velasquez’s four-year-old son according to investigators. Two days after his arrest, Goularte was released on bail. The next day, Velasquez would lead Goularte and two other individuals on a high-speed chase. Velasquez is said to have fired multiple shots into the car, hitting Goularte’s stepfather Paul Bender in the process.

While Goularte was granted bail, Velasquez has been denied bail during two separate hearings.

“Of course, Cain did not play a smart role in doing what he did, but the system is completely disgusting where they can allow a man [Goularte] to go free. Knowingly letting a guy free back to that situation. Once you molesting kids and then releasing them back to the premises of a daycare he lives on where he molested his children. What the f*ck? No bail? Allowing a person to go back to this situation on that standard. It’s like, so pathetic how twisted our world is and how pathetic things are.”

Luke Rockhold said he has been pushing for Velasquez to be inducted into the 2022 class of the UFC Hall of Fame to honor the former champion and bring more attention to the heartbreaking situation he is currently facing.

“I think Cain should have been in the hall of fame a long time ago. One of the nastiest, most greatest champions of all time. I was trying to push for him to get his hall of fame bid this year to bring more attention to it.”

Velasquez is scheduled for a formal plea hearing on June 10. If found guilty, Velasquez could face life in prison.