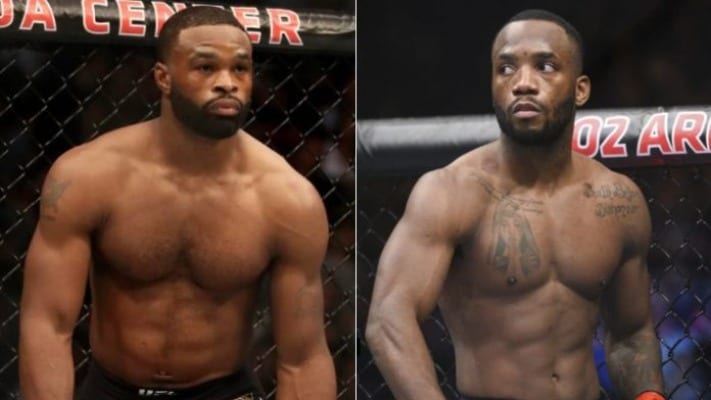 The pair will headline UFC London from the O2 Arena in London, England on March 21. While it was clear Woodley didn’t want to make the trip overseas for the contest, Edwards tells MMA Junkie that the UFC had to “force” the former welterweight champion to accept the fight.

“Tyron was trying to make excuses of why he shouldn’t come overseas and why he didn’t want to come to London,” Edwards told MMA Junkie. “The UFC had to force him into it. They gave him no choice but to take the fight. He was forced into it. He knows it’s a dangerous fight for him, and after I beat him, where does he go? He knows the risk.

“I went to Vegas and I had a meeting with Sean Shelby and Dana White and they were saying, ‘You’ve got no other options.’ He would fight me or they were going to move him out of the rankings. He had no choice. He had to take the fight. There’s no other way for him to go. He can’t wait out for a title shot because that’s not going to happen. It’s the only fight that makes sense for the division.”

Edwards has been extremely impressive in his welterweight run. The Englishman is on an eight-fight win streak over names such as Gunnar Nelson, Donald Cerrone, and Rafael dos Anjos. While he already had a case to challenge for the title next, a win over a former champion such as Woodley will make a title shot virtually undeniable.

“After this fight I’ll be ranked No. 1 and on a nine-fight win streak,” Edwards said. “That’s second most to the champion right now. There’s no bigger fight. I would have loved the title fight or (Jorge) Masvidal, but this is the next best thing. Fighting Tyron Woodley, a former world champion, some people consider him the best welterweight of all time.

“It’s good to be able to go out there and prove my case that I’m leaps above these guys. I look forward to going out there and putting on the performance of my life. I’ll show I’m better than these guys and it’s going to be good.”

What do you think about Edwards saying Woodley was forced to fight him?