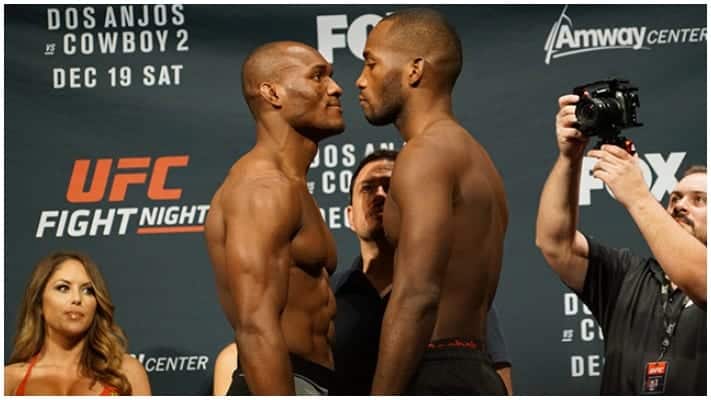 Leon Edwards continued his winning ways at UFC 263 this past weekend.

The Englishman survived a late scare to pick up a unanimous decision win over Nate Diaz on Saturday night.

‘Rocky’ has been perfect since losing to Kamaru Usman in 2015. He was nine wins from 10 fights, the only blemish on his record being a no-contest due to an accidental eye poke when he fought Belal Muhammad earlier this year.

Despite the impressive form of Edwards, Usman suggested post-fight at UFC 263 that his former doe doesn’t deserve a rematch.

“That don’t help you,” Usman told ESPN after Edwards won a unanimous decision at UFC 263. “I guess no one deserves it.”

After hearing about Usman’s comments, Edwards accused the welterweight champion of making excuses to avoid fighting him.

“All these guys making excuses,” Edwards said at the UFC 263 post-fight press conference. “They know I’m the real deal. They know I’m the man for the title shot. They’re all b*tching and making excuses and saying ‘he doesn’t deserve it.’ Then who f*cking does? Colby don’t deserve it. [Tyron] Woodley got injured [in their fight] and now [Covington is] deserving a title shot?

“I didn’t b*tch, I didn’t moan, I took my loss on the chin. I worked my back up to a nine-fight win streak. Who else f*cking deserves it?”

“I feel I should be next for the title shot,” Edwards said. “That’s nine in a row, 10 in a row, there’s no one else that’s doing what I’m doing. I’ve offered to fight everybody. Khamzat [Chimaev], Diaz, Belal [Muhammad], these guys are not even in the top-10.

“I’m the one saying yes, everyone else is b*tching and sitting out and complaining. I’m the one showing up and beating these tough guys. I feel I deserve the next shot for sure.” (Transcribed by MMA Fighting)

Do you agree with Leon Edwards? Should he be next in line for a shot at Kamaru Usman?