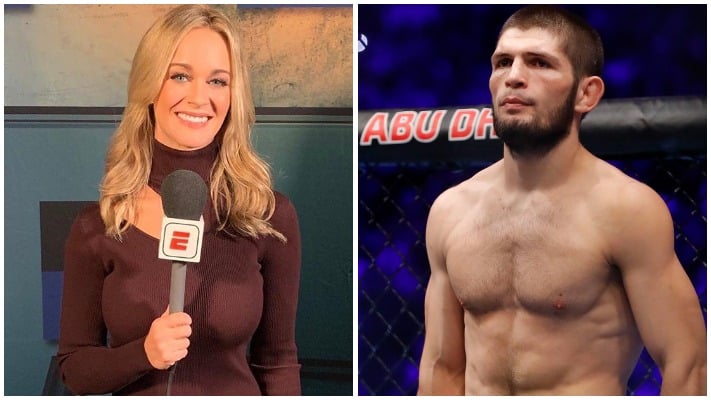 Laura Sanko has leaped to the defence of Khabib Nurmagomedov who is currently in the firing line after making some controversial comments about the presence of ring girls in MMA.

“Look, I don’t want to offend anyone, ring girls are the most useless people in martial arts,” Nurmagomedov said. “What is their purpose? I have a question. You can show that it is the second round on the screen.”

Nurmagomedov has received some flack for his comments.

Long-time UFC ring girl, Arianny Celeste, was particularly irked by what the retired fighter had to say.

“I think it’s a cultural difference,” Sanko told James Lynch. “I think we have to accept that that is a very valid opinion for him to have and it’s his personal opinion and he was talking about why he’s not gonna have them at his promotion…that’s within his right to do so… If he had specifically attacked our ring card girls or any ring card girl by name, I definitely would jump to their defense. I think it’s more the idea for him, it’s not just something culturally that he finds valid and I respect that about him. I think he’s perfectly fine and within his rights to talk about that.”

Sanko doesn’t buy into the narrative that Nurmagomedov lacks respect for women.

Do you agree with Laura Sanko? Is Khabib Nurmagomedov being misunderstood due to cultural differences?