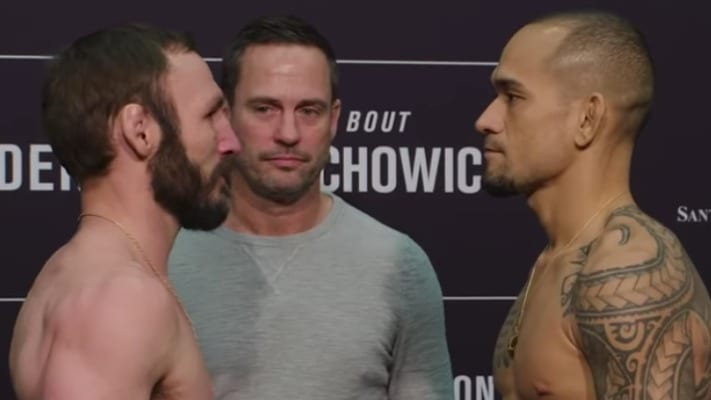 Kicking off the UFC Rio Rancho main card is a lightweight bout between Lando Vannata and Yancy Medeiros.

Round 1: Lots of leg kicks being shared by the two in the first minute. Vannata looks very loose in there. Vannata starts to land more with some head strikes but doesn’t hurt Medeiros. Medeiros is missing a lot as Vannata has the significant strike advantage. Not a lot of action in that first round.

Round 2: Medeiros is starting to advance more but it’s Vannata landing more strikes. Vannata clinches with Medeiros and trips him but the Hawaiian gets up. Vannata is displaying great head movement as Medeiros is missing with a number of jabs. Vannata lands some nice hooks. Vannata then grabs a hold of Medeiros’ back but they eventually separate. Vannata ends the round with a spinning heel kick but Medeiros evades it.

Round 3: Vannata catches a body kick and loads up on Medeiros. He partially lands a spinning wheel kick soon after. Medeiros misses a spinning kick to the body. Medeiros’ nose is bleeding. Vannata lands a big right. Vannata continues to land more while evading strikes from Medeiros. Medeiros taunts him before dodging another spinning wheel kick attempt. Medeiros is landing much more in the final minute as Vannata goes backwards. The fight comes to an end with Vannata likely having done enough.