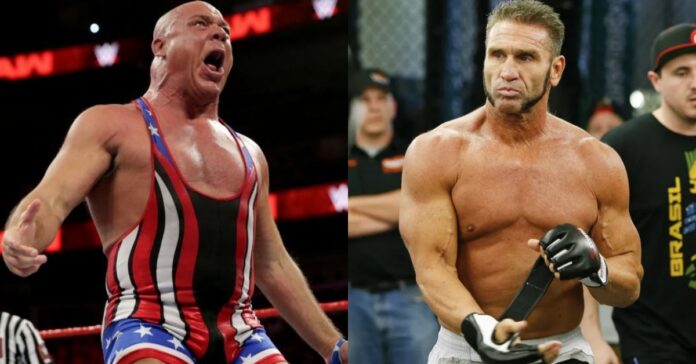 Most recently featuring in the main event of Bellator 149 back in 2016, Shamrock, who featured at UFC 1 back in 1993, suffered an eventual third round TKO loss against Royce Gracie – seeing his record drop to 28-17-2 as a professional.

READ MORE:  Michael Chandler calls for BMF title fight with Jorge Masvidal: 'Tell me that wouldn't get the juices flowing'

Linked with a potential sanctioned fight against professional wrestling star and fellow veteran, Angle, the bout failed to ever come to fruition for the duo – with Angle now revealing a slew of high-profile and well-documented neck injuries prevented him from competing.

“There was no way I was able to do it,” Kurt Angle said on The Kurt Angle Show. “I had no strength in my upper body. If you remember my thing with Daniel Puder, I couldn’t do three push-ups at that particular time. Dan caught me in an armbar – I was in trouble, if he would have kept going, if he wouldn’t have pinned himself, I would have ended up breaking my arm.”

“I was losing circulation to my arms,” Kurt Angle explained. “So my arms got weaker – and got smaller, and I couldn’t do anything, I couldn’t bench 135 pounds, I was weak. My upper body was so weak.”

Angle further explained that during an exchange with Shamrock, he informed the Pancrase veteran that he would “have to take it easy” if he was to ever compete against him in a professional mixed martial arts setting.

“I said, ‘Listen, I am not in any position to fight right now – dont’t get me wrong,” Angle explained. “I can still take you down.’”